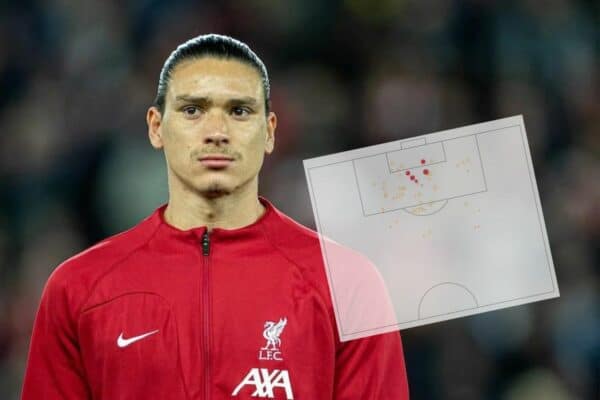 Darwin Nunez continues to show immense promise in his Liverpool performances, but hasn’t had the goals to show for it since returning from the World Cup earlier this month.

In the Reds’ 2-1 victory over Leicester on Friday, Nunez again missed several big opportunities to get his name on the scoresheet, but his good work did lead to Wout Faes’ second own goal, one that would prove to be the winner.

And a stat that has emerged after the game perfectly sums up Nunez’s chaotic style of play.

According to Opta, among the players in Europe’s top 10 leagues that have played over 500 minutes this season, Nunez ranks first for shots per 90, with 6.0. That is a hugely encouraging statistic for Liverpool.

Yes, Nunez has struggled to rack up the goal involvements his performances have deserved in recent weeks, but the fact the Uruguayan is getting into so many goalscoring positions proves there is no real cause for concern.

However, the other aspect of this statistic shows where he needs to improve. Despite his impressive shots per 90 ranking, in the same pool of players, Nunez ranks 99th for goals per 90 (0.57).

Once he has improved his finishing, something Jurgen Klopp seems completely convinced will eventually happen, Liverpool will have a striker who offers pretty much everything you’d want from a player in his position.

Trent Alexander-Arnold, who along with Nunez was one of Liverpool’s better performers against Leicester, says he and his team-mates have been hugely impressed with the striker since his arrival from Benfica.

“I think I speak on behalf of all the lads: he’s been, I think, outstanding since he came in,” Alexander-Arnold told LFCTV after the game.

“People will judge him on his goals and that’s part of being a striker, that’s part of life. But I think he can keep walking off the pitch with his head held high because he is getting in positions that are really, really hurting the opposition.

“He’s such a threat, he’s getting in behind, he’s holding the ball up, he’s flicking balls on, he’s doing everything that the manager has asked of him. His pressing, his attitude, his desire, you can’t question any of it.

“You’ll get people who will say he’s missed a few chances and he’s missed one-on-ones and maybe he should have tucked the second goal away, but he’s getting himself in those positions and when the goals do come I’m sure they will come like London buses! We’re just waiting for that but he’s a fantastic lad and he’s an outstanding player as well.”