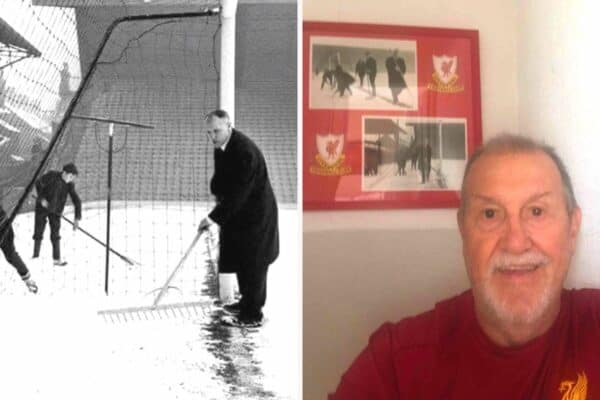 The heartwarming story behind an iconic Bill Shankly photograph

The date is December 28, 1964, and although the Reds are getting warmed up for the visit of relegation strugglers, Sunderland, Anfield is buried under a mountain of freezing snow.

The terraces are a sight, covered as they are in a generous dusting and the pitch crunches underfoot as it is frozen solid. The game is in danger of being called off, and the Reds – lanfuishing in 12th place – need to get the fixture on.

Never one to admit defeat, Bill Shankly assembles his team of groundsmen, grabs a shovel and decides he’ll clear the pitch himself. However, the task is a huge one and soon an appeal goes out for anyone local to come along and help out.

What followed led to one of the most iconic photographs of the Shankly era. One of a number of volunteers that day was a 16-year-old apprentice fitter, Roy Lindo. Little did he know that his experience that day would be immortalised forever.

“When I got inside the ground, we were assembled in the paddock,” Roy told This is Anfield.

“Shanks was on the pitch with a couple of people raking and breaking up the ice on the surface. As a young lad, seeing the great man close up, I was like ‘wow!'”

Roy had been a regular at Anfield throughout the club’s promotion push and had seen Shankly lead Liverpool back into the First Division, only to go on and win the “big league” in 1964.

Like all Reds, Roy idolised the Scot. However, he was about to get even closer to the man who was rapidly becoming an icon. Roy picks up the story:

“He asked me and another guy to shovel the snow off the steps and put it down the front [of the stand]. We did the same with a bit of snow in the Annie Road. Then, when we had finished, Shanks said to me, ‘jump up here grab a rake and work alongside me breaking the surface of the snow up’.

“By this time I was floating on air working with the great man. He thanked me for my efforts and I was told to give my name and address to someone. Shanks said he would send a couple of tickets for a game to me as a thank you.”

Those tickets sadly never arrived and Roy joked, “I’m still waiting. Maybe they got lost in the post.”

To Roy, the bragging rights of working at such close quarters with Shankly were worth more than any match ticket.

“I couldn’t wait to get into work the next week to tell the lads my story,” Roy continues.

“For years afterwards I always boasted proudly of how I helped Shanks get a game on by shifting snow. Of how I actually worked alongside him on the pitch.”

The events of that day have understandably lived with him his whole life and are a source of great pride. In more recent times, those memories have helped Roy to cope with a cancer diagnosis.

“Eight years ago I found out I had a small cancer growth in my bladder,” Roy recalls.

“Within two weeks I was in Broadgreen [Hospital] getting it sorted. As I was getting over my op, my brother-in-law, Gerard, who is a Bluenose, came in to see me.

“I was feeling very low and feeling sorry for myself, and tired. Then Gerard passes me this book, 100 Pictures of Shankly. He’d seen it in a shop and thought of me.

“As soon as he was gone I dived into it, scanning the pages and images. Then, BINGO! There it was, the picture of Shanks holding a rake on the touchline, and yours truly in the background raking around the goalpost.

“Well, all of a sudden, my spirits instantly lifted. At last, finally, proof that it really happened. I showed the lads in the ward, and must have bored all the nurses too. My treatment went well, and I’m still cancer free.”

His prize was to have the tale immortalised in one of the hotel’s rooms. The photo and the story now form part of Roy’s proud legacy, one which is shared lovingly with his family, including his two Liverpool supporting grandsons, Charlie and Alex, aged 13 and 12.