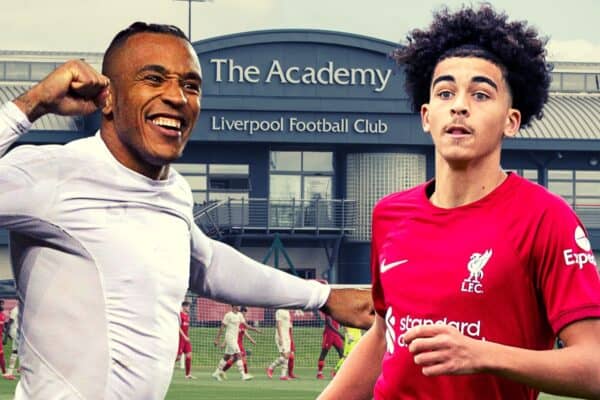 As a full-time footballer, father-of-three and part-time Liverpool academy coach, Neil Danns admits he has a lot on his plate.

But the 40-year-old midfielder, whose 21-year playing career has taken in spells with Blackburn, Birmingham, Crystal Palace, Leicester and Bolton, among others, speaks with fondness of his association with Liverpool.

That not only includes time spent working with the club’s promising youngsters at the AXA Training Centre, but also through his son, Jayden.

In an exclusive interview with This Is Anfield, the Macclesfield midfielder speaks about his opportunity as a coach in the Liverpool academy, where he himself came through as a scholar in the 1990s.

“I joined the academy as a coach just after Covid, after the lockdown, and I went in and worked with a lot of the age groups right up to under-14s and 15s,” Danns, who chose to leave Liverpool for Blackburn in 1999, explains.

“I was just learning the trade, gaining a bit of experience.

“I did my coaching badges about six years ago, so having been there watching my son train most of the time, Alex Inglethorpe and Nick Marshall offered me the chance to come and work with some of the younger players, which was absolutely brilliant.

“There’s so much talent in and around the academy, and Alex and people like Nick are doing a fantastic job.

“I think we’re starting to see now with the influx of young players that are starting to come through the academy, notably a lot this year like Stefan Bajcetic, Bobby Clark, Isaac Mabaya, just to name a few.”

Danns has worked closely with some of those now breaking through into the under-18s, with manager Marc Bridge-Wilkinson nurturing another group of top talents.

But his time on the training pitch is minimal at present, as he focuses on life with non-league Macclesfield, for whom he is a regular starter.

“It’s been hard juggling family life, full-time football and the coaching at the academy at the same time,” he admits.

“I’ve been in a lot less this year, just to focus on the last years of my football.

“Then hopefully after I do retire fully, then I can get back in there and gain some more experience.

“But everyone was brilliant with me in the academy, like I say big thanks to Nick Marshall, Alex Inglethorpe, Michael Yates, everyone involved really there.

“It is one of the best academies in the country and it was a privilege to be allowed to go in and work with the boys.”

Jayden Danns is a bright young forward who is making his first forays at U18s level, with eight appearances so far including a start in a 3-2 win over Stoke in October that brought his maiden goal.

The 16-year-old can play in a variety of roles, but has most often been deployed up front as the prolific Lewis Koumas fills in for injuries in the under-21s.

“I haven’t been coaching him directly at the academy. I had to opportunity to work with his group, but I decided not to,” his father reveals.

“Just because I’d like for him to go on the journey by himself, without having the pressures of me getting on his back!

“But at home and stuff like that, he does to a lot of extra work – through himself, not because I tell him to, that’s just the sort of person he is – and I analyse his games obviously.

“Having played in the game and him being my son, it’s only natural that happens. I’ll just give him some pointers and advice really.

“He has his own abilities, he’s not the same type of player as me. He has certain parts of his game that I had when I was young, but he’s definitely on his own path.

“So I allow him to just take that journey. I’m always there for support and advice whenever he needs it.”

As Danns admits, there is a long road ahead for a player like his son, who has fierce competition ahead of him in the likes of Koumas, Oakley Cannonier and Layton Stewart.

But he has a more-than-qualified support network, with Macclesfield’s No. 8 there to remind him of what it takes to achieve his dream of playing for Liverpool at Anfield.

“It’s been amazing to see my son break through and get some game time with the under-18s this year,” Danns adds.

“He’s only 16, so he’s still got a lot to learn and a long way to go, but obviously with the standard of coaching that goes on at the academy, he’s in no better hands to take his game to the next level.

“The hopes I have for him are basically just to be the best he can be, work hard every day and enjoy it – and see where it takes him.

“We know to get in that Liverpool first team you have to be a special player, and Jayden has just got to focus on himself, keep his head down, keep working hard every single day and see where it takes him.

“I’m proud of him no matter what because I see the work that he does put in. He’s got a great attitude, so long may that continue.

“I’ll be proud of him no matter what level he plays at, but his dream is to one day wear the red shirt and come on at Anfield.

“If that’s his dream, then that’s my dream.”