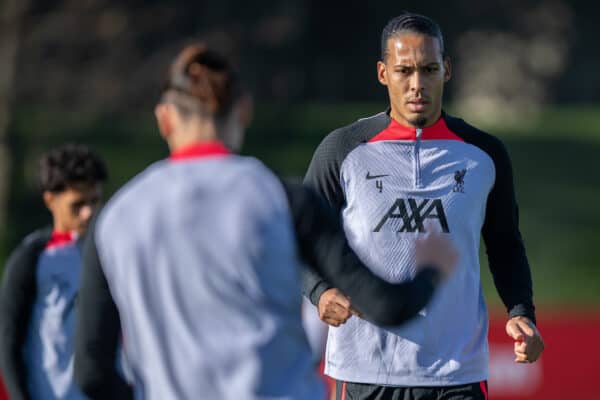 Unlike five others who were knocked out of the World Cup early, Jurgen Klopp has taken a cautious approach with Virgil van Dijk‘s return to action.

During Liverpool’s training camp in Dubai and then the Carabao Cup defeat at Man City, Klopp has overseen the reintegration of five of his World Cup representatives.

Darwin Nunez rejoined the squad in the United Arab Emirates and started at the Etihad on Thursday night, while Jordan Henderson and Fabinho both came off the bench against City.

Alisson and Trent Alexander-Arnold, meanwhile, have been involved in training sessions all week, with the latter in line to feature in midweek only for illness to rule him out.

For Van Dijk, who suffered defeat with the Netherlands in the quarter-finals, it has been a more patient process, with the centre-back having only returned to training on Wednesday.

As revealed by the Press Association, via BBC Sport, that comes with Van Dijk having played the third-most minutes for club and country of any other Premier League player so far this season.

Alisson (2,544), meanwhile, is fourth in the list, though his absence in the week was more due to the preference of Caoimhin Kelleher as Carabao Cup goalkeeper.

In his pre-match press conference on Friday, ahead of the trip to Aston Villa on Boxing Day, Klopp explained his concerns over misusing players in a “really tough” schedule.

“For the players who played a lot during the World Cup the whole year will be incredibly intense,” he told reporters.

“We have to see how we deal with that and we will be really careful with all the information we get, but for the moment, everybody should be fine.”

Van Dijk is expected to come back into the side against Villa on Monday, likely alongside Joel Matip, who played 90 minutes on his return to competitive action at City.

For Ibrahima Konate, however, it won’t be until the visit of Leicester on December 30 that he rejoins his Liverpool team-mates.

The Frenchman, who played a part in the final against Argentina, will return to training after Villa.