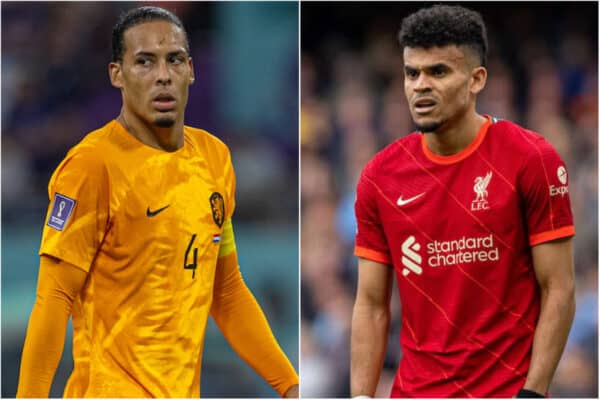 It was a terrible day at the World Cup for Liverpool players, but a fantastic one for neutrals who just want action and tension until the final minutes.

It was very tough on Alisson, who had had basically nothing to do all game other than claim some aerials and play out from the back. Fabinho was an unused sub.

Neymar was dismal, then brilliant for a few moments, and it looked as though the Selecao were going through – until the equally terrible Bruno Petkovic finally got a shot away and it flicked off Marquinhos into the corner.

The same defender then saw his spot-kick strike the post, leaving Neymar without taking one and Brazil heading home. Croatia have never been to the World Cup and failed to get to at least the semis once they get out the group stage. 1-1, then 4-2 on penalties.

Later was even more dramatic if anything; some Messi magic brought a goal and assist, but the South Americans imploded under the pressure and the Dutch comeback featured an ingenious late free-kick as Wout Weghorst scored twice.

Tempers definitely started to fray and the end of the penalty shootout was part celebration, part taking every opportunity possible to rub their opponents’ faces in defeat.

Van Dijk took the Oranje’s first, went low and left, but Emi Martinez – excellent in the shootout, ruthless in his post-match interviews – dived correct and saved. 2-2 and 4-3 on pens.

“Not good” was the understated reaction by Jurgen Klopp to news that Luis Diaz has suffered a fitness setback, just days after rejoining training with the first team.

His return was due to be one of the big positives after this mid-season break, but the Colombian has had discomfort in his knee and now heads back to the UK after just a few days at the Dubai training camp.

He’ll need further assessment and then we’ll see what the true damage is – but hopes won’t be high that he’ll feature in the Christmas return-to-action fixture list now.

Fans were quick to take to social media to relay the idea that the Reds simply have to go for attacking reinforcements in the January transfer market, if Diaz faces a sustained spell out.

Diogo Jota is still sidelined, leaving only Darwin Nunez – who has been at the World Cup – Mo Salah and Roberto Firmino as senior attackers.

Netherlands manager Louis van Gaal and most especially referee Antonio Mateu Lahoz both receive both barrels here – in fairness, Lahoz was typically atrocious all game. Send him home, as usual he just wants to be centre stage.

?? "Hopefully we don't have that ref anymore… He's useless! Van Gaal said they have an advantage if it goes to penalties, he needs to keep his mouth shut."

? @emimartinezz1 didn't hold back in his post-match interview!

Van Dijk asked if Argentina will win the World Cup: “I don’t care. I won’t watch any more.”

Well now. What an opportunity for the first two nations, both well outside the favourites at the start of the tournament even if the Europeans have a very strong squad. Now they’ve actually taken strides to make the starting XI as strong as it can be, perhaps matters will pan out well for them.

But the African side have been heroic, resolute and very entertaining at times throughout – they will not have as good a chance as this to make the World Cup semi-finals for a long time to come, it feels like.

And then there’s the later game; Euros finalists vs world champions, Bellingham vs Mbappe, Trent and Hendo vs Konate. Only one is a likely starter – our skipper – but depending how the game goes, all could yet play a part.

It promises to be another very eventful (and stressful for many) day.