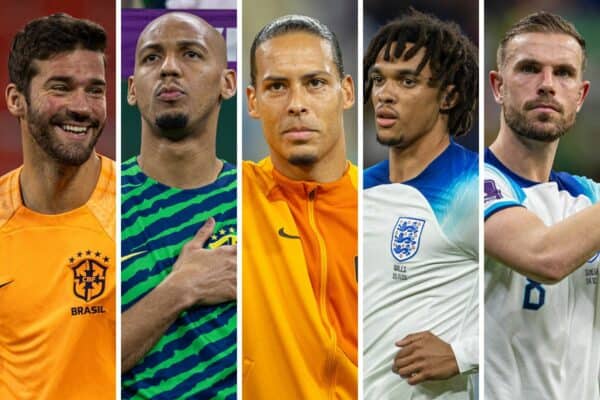 With five Liverpool players not making it past the World Cup quarter-finals, when should we expect them to reconvene with the rest of their Liverpool team-mates?

After Darwin Nunez‘s Uruguay failed to qualify for the knockout stages, five of the other Liverpool players who featured in Qatar will now enjoy a short break before they return to club action, having been knocked out in the quarter-finals.

On Friday, Alisson, Fabinho and Virgil van Dijk saw their World Cup campaigns come to an end, with both Brazil and Netherlands eliminated from the competition after a penalty shootout.

The following day, France beat England 2-1 to set up a semi-final against Morocco, meaning Trent Alexander-Arnold and Jordan Henderson‘s tournaments are also now over.

So with Ibrahima Konate the only remaining Liverpool player still in action in Qatar, when can we expect those who have just crashed out of the competition to be back with Liverpool?

Who returns when, and when will they be ready for match action?

When Liverpool named the 33-man squad that would travel to Dubai, they confirmed that Nunez would join up with the squad in the UAE the week commencing Monday, December 12. By then, the Liverpool forward will have had 10 days to rest since Uruguay were knocked out of the World Cup.

Those who were knocked out in the quarter-finals will be handed a similar break, with Klopp confirming on Friday that players will be given a week off after their international duties.

“They have some days off and then they come back and we train again and then we play again,” he told LFCTV.

“So, everybody will have a week off, I would say, after a game. That means it will go into the season, so we will see.”

With Nunez returning on Monday, he will miss Sunday’s friendly against Lyon, but should be able to feature against AC Milan before the Reds return to Merseyside.

Alisson, Fabinho, Van Dijk, Alexander-Arnold and Henderson are unlikely to join up with the rest of the squad in Dubai, but should return to training at some point during the week commencing Monday, December 19.

Having just had a week or so off, they could theoretically feature when Liverpool return to competitive action against Man City on Thursday, December 22, but that seems unlikely.

Klopp will likely prefer to hold them back and have them fully ready for Liverpool’s Premier League trip to Aston Villa on Boxing Day.

France’s win over England means Konate will remain in Qatar until next weekend, regardless of his side’s result in their semi-final.

That is because the losers of the semi-finals will take part in the third place play-off next Saturday.

Lasting the duration of the tournament means Konate is unlikely to return to training until just after Christmas, likely ruling him out of the Boxing Day clash with Villa at the very least.

Depending on his fitness, he may be able to return to action against Leicester on December 30.

As you’d expect, Klopp has chosen to prioritise Premier League and Champions League matches over Carabao Cup encounters in seasons gone by.

However, with no other competitive games prior to the Carabao Cup last 16 meeting with Man City on December 22, he should be able to field a much stronger XI than the one that faced Derby in the previous round.

With just seven players featuring at the World Cup, the Liverpool boss has had the majority of his squad available to him in Dubai.

By contrast, Pep Guardiola has seen all but three of his senior players feature in Qatar, with Erling Haaland, Riyad Mahrez and Sergio Gomez the only ones that remained at home.

For that reason, should he want to use most of his key players, Klopp could have the luxury of naming a stronger team than his counterpart.