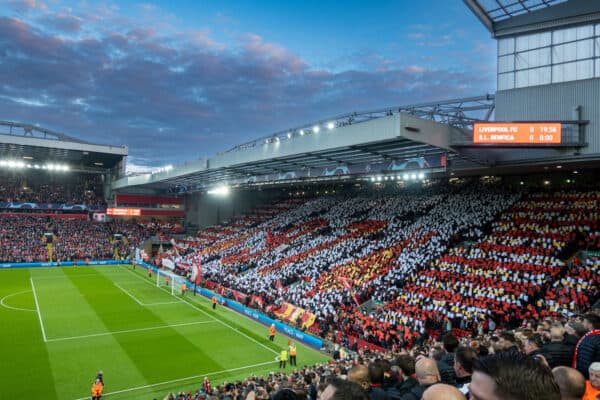 Sixteen Chelsea fans were ejected from the away end at Anfield on Saturday for offensive chanting relating to the Hillsborough disaster.

Liverpool fans were subjected to almost constant chanting about the disaster that saw 97 innocent supporters unlawfully killed in 1989.

The Chelsea fans that were ejected were apparently warned before being ejected from the stadium.

In January last year a Shrewsbury fan was arrested for offensive chanting relating to the Hillsborough disaster and the club banned two fans for eight years.

The amount of visiting supporters singing about the disaster and celebrating the deaths of innocent people has risen in recent years, with Chelsea and Man City in particular.

Last April, Jurgen Klopp used his programme notes to write: “If you are going to a football match to sing about people losing their lives you really should not bother coming.

“Really? The deaths of 97 people in a tragedy is now something that can be mocked? How did this happen?”

Alas, Klopp’s words have fallen on death ears and the offending clubs have done little to sanction their own fans.

I have the misfortune to be sitting at the away end today. It’s horrific. Just constant songs and shouts about Hillsborough.

At the match sat very near @ChelseaFC fans having to listen to renditions of "always the victims" and "murderers" this needs clamping down on immediately. It has an effect on mine and others mental health@FA @LFC

The events on Saturday were made further frustrating by the fact that Liverpool FC had worked so hard to ensure its own supporters refrained from singing homophobic chants, with a video from Jurgen Klopp pre-match and a long message over the PR tannoy during the game itself.

So while Liverpool supporters refrained from such offensive chanting, the Chelsea away end were already singing about Hillsborough from long before kick-off, including outside the stadium, and throughout the match itself.

To date, Man United are the only club to have called out their own supporters for such chanting.

Sadly, things will not change until the clubs of these supporters that seem to find pleasure in singing about the deaths of innocent people, or indeed child poverty, do something to discourage them.

The Liverpool supporters union, Spirit of Shankly, has written to the club, the Football Association and Premier League to raise the issue as part of their ongoing dialogue to challenge chants of this nature.