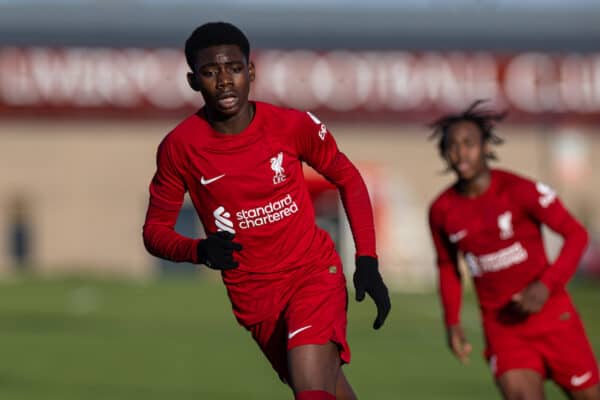 A superb display from 16-year-old Elijah Gift marked the mini-Merseyside derby, but the Liverpool under-18s fell late to draw 2-2 with Everton.

After the mid-season reshuffle, it is a very young U18s squad available to Marc Bridge-Wilkinson, and in Saturday’s mini-derby that saw the majority of his side aged 17 or under.

That transition has led to a run of difficult results, and heading into the weekend they had lost five in a row in the league, but were buoyed by back-to-back FA Youth Cup wins.

The occasion brought more quality to the fore, and Liverpool were a goal up within five minutes after brilliant work from Gift and a confident finish from 15-year-old Kareem Ahmed.

Liverpool were dominant for much of the first half, with the combination of Gift and captain Josh Davidson on the right-hand side allowing them to keep control.

But a costly mixup between centre-back Lucas Pitt and midfielder Fola Onanuga, the latter receiving a pass he would not have wanted, allowed Everton to equalise just before half-time through Martin Sherif.

With the scores even, it was a more even affair in the second half as both sides took tentative approaches towards opposite penalty areas.

Liverpool’s opening came on the break, and with deep-lying midfielder Cody Pennington playing an excellent pass out to Gift on the right-hand side, the No. 7 cut inside and scored a stunning goal with his left.

Superb from Elijah Gift to give #LFCU18s the lead ? pic.twitter.com/hBYQMthdS5

The final half-hour brought the return of Trent Kone-Doherty from injury, while Bridge-Wilkinson took a vocal approach in coaching Pennington as the young Reds looked to see the victory out.

His encouragement did little, though, as the defence fell apart and a through ball allowed Sherif to finish beyond Fabian Mrozek and ensure a share of the points.

A gilt-edged chance fell to Kone-Doherty in stoppage time, but the winger wasn’t alert enough and failed to convert after Davidson’s cross came back off the post.