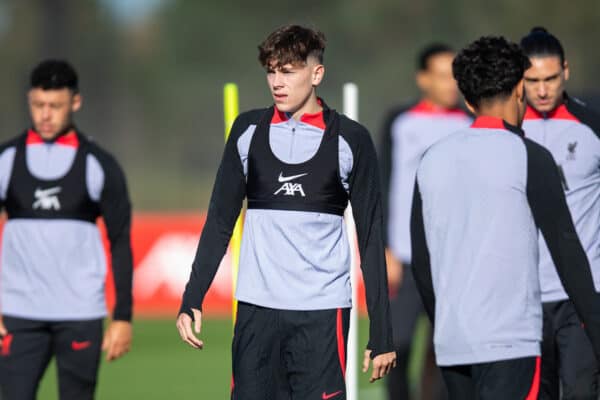 6 youngsters train with Liverpool first team ahead of Wolves tie

It is likely to be a strong Liverpool squad that takes on Wolves in the FA Cup, but first-team training did include six youngsters from the academy.

The Reds took in one of their final training sessions before their third-round tie on Thursday, with a 27-man squad put through their paces on a sunny winter’s afternoon.

Cody Gakpo was involved following his arrival from PSV Eindhoven, but Naby Keita was absent along with James Milner, Roberto Firmino and those with long-term injuries.

Despite the lack of senior options with Milner, Firmino, Virgil van Dijk, Luis Diaz, Diogo Jota and Arthur all out, it is still expected to be a strong lineup on Saturday.

But those youngsters involved in training could give a hint as to the options Klopp is considering against Wolves.

With Marcelo Pitaluga sidelined, Fabian Mrozek was again part of the goalkeeping group along with 19-year-old Harvey Davies, with the pair on standby for any late dropouts.

Meanwhile, Luke Chambers was called up from the academy, with the 18-year-old now considered a viable candidate at both left-back and centre-back.

It is at centre-back where he could be most useful at present, with Van Dijk’s hamstring injury leaving only four senior options in Ibrahima Konate, Joel Matip, Joe Gomez and Nat Phillips.

Stefan Bajcetic remains a regular part of the first-team setup and could potentially start on Saturday, while both Bobby Clark and Ben Doak were recalled.

The Liverpool under-21s play Tottenham in their first game in two months on Sunday, and it seems likely that Chambers, Bajcetic, Clark and Doak will all miss out.

Instead, at least the four outfielders should take up places in the matchday squad for the FA Cup, with an opportunity for more minutes.

For Chambers, there is even the chance of a senior debut, having previously made the bench on two occasions – against Fulham in the Premier League and Derby in the Carabao Cup.