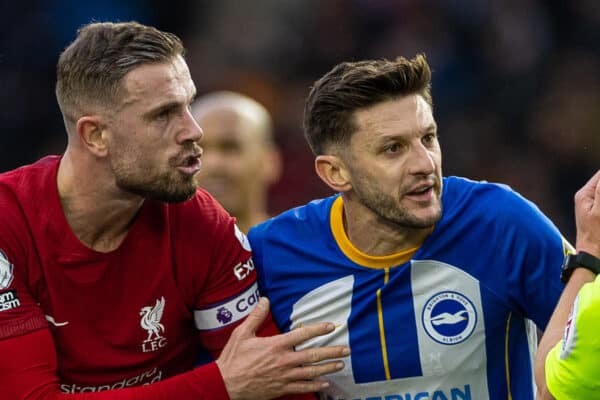 Adam Lallana a doubt for Brighton vs. Liverpool with “minor issue”

Ex-Red Adam Lallana is in doubt for Brighton ahead of Liverpool’s visit in the fourth round of the FA Cup, having picked up a “minor” injury over the weekend.

Jurgen Klopp‘s side return to the Amex on Sunday, just 15 days after they were taught a lesson in a 3-0 defeat that laid this season’s myriad of issues bare.

The manager described the loss as the “worst game” he could remember, a real “low point” for a Reds side in desperate need of confidence.

A boost was injected at Wolves to set up this fourth-round tie, and Brighton could be without Lallana for the clash after picking up a muscle injury at Leicester on Saturday.

The Seagulls drew 2-2 at the King Power, with 18-year-old Evan Ferguson scoring late to deny Brendan Rodgers’ side all three points.

Lallana watched most of the proceedings from the sidelines, withdrawn at the half-hour mark with a muscle injury that leaves him in a race to be fit for Liverpool’s visit on Sunday.

“I think it is a muscular injury,” Brighton manager Roberto De Zerbi told reporters. “Normally we play better with Lallana on the pitch for sure.

“But I think in the second half we maybe played better. We were stronger in the last part of the pitch when we were attacking.

“We were stronger but Lallana is a very, very important player.”

Lallana himself has said on Instagram that the injury is a “minor issue” and that he “will be back soon enough.”

With an extensive injury history, you’d question if a risk would be worth taking against the Reds even if he was able to prove his fitness in time.

Levi Colwill and Jakub Moder remain sidelined for Brighton, while Liverpool are likely to welcome Darwin Nunez back to the XI after his 27-minute appearance off the bench against Chelsea.