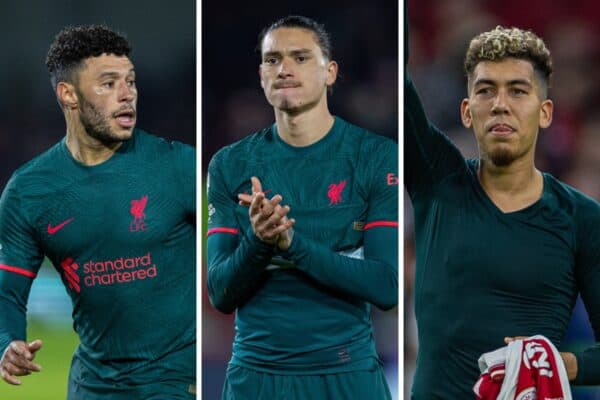 Alex Oxlade-Chamberlain explains role of emulating Firmino from the wing

Alex Oxlade-Chamberlain is the latest player to fill the position on the left of Liverpool’s attack, a role that has been moulded to account for Roberto Firmino‘s absence and Darwin Nunez‘s style.

Oxlade-Chamberlain made his third successive league start at Brentford, his longest run since February 2020, and it came with his first goal since January 2021.

He started alongside Nunez and Mohamed Salah in the forward line, a role the Englishman has been tasked with in the absence of Luis Diaz, Diogo Jota and more recently Firmino.

And it is the role of the latter he has been trying to inject into the side while playing from the left, with Nunez’s strength running in behind the defence rather than dropping deep from the central position.

The 29-year-old was one of the few players to leave Brentford with any credit and post-match he explained to LFCTV what his focus has been from the left wing.

“I’ve watched Sadio and Mo play that position for years, and one thing they’ve both done outstandingly well is provide goals for the team,” Oxlade-Chamberlain said.

“Obviously, it’s a bit different when Darwin is playing through the middle as he is such a threat in behind, and usually when Bobby plays that role he is the one that drops a bit deeper and fills the half-space.

“That’s kind of been my role from there, being the one that drops deep and tries to link. But ultimately, get up with Darwin and Mo’s pace and get in around the box.

“That’s the thing in the last few games that I’ve been missing, that real goal threat so it was nice to get that chance and take it – just a shame it doesn’t mean anything.”

Despite the injuries, Liverpool’s forward line has been the least of their issues and Cody Gakpo‘s arrival does add another option on the left, which will have a direct influence on Oxlade-Chamberlain.

That, though, could pave the way for a return to midfield – an area of the pitch the Reds desperately need to address and his physicality would not go amiss.

“It’s massive is rhythm and I’ve had the opportunity now to have three on the spin and I feel good for it,” Oxlade added on his run of games.

“When I’m playing and getting opportunities in that role, I need to do more and provide more to impact the game.

“That was lacking, for any attacking-minded player goals or creating chances are massively important and that’s no different for me.

“Luckily, in that sense, [the goal] was good for me moving forward but, ultimately, the main thing is I didn’t manage to get a second.

“I’m sure Mo and Darwin will be thinking the same because if we had got that second, maybe things could’ve been different.”