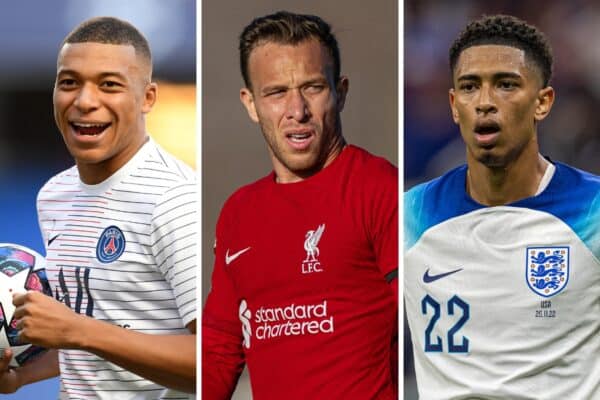 No January exit for Arthur – but Bellingham “optimism”

As he continues his recovery from a long-term thigh injury, this week brought claims that Arthur‘s loan could be cut short.

Brazilian journalist Felippe Facincani described the situation as “very complicated” as Palmeiras explore the possibility of signing the 26-year-old from Juventus.

So much so, it seems, that it will not be happening – at least this month.

In the Liverpool Echo‘s live blog on Thursday afternoon, it was explained that “there’s no chance of Arthur leaving Liverpool this January.”

The midfielder will not be retained beyond the end of the season, though, with plans in motion to revamp Jurgen Klopp‘s midfield.

News #Bellingham: Liverpool bosses are still optimistic to sign him in summer. Talks took place but important to say: He hasn’t yet spoken personally to #Klopp so far. And there is no official offer. #LFC offers him the possibility to become the new Steven Gerrard. @SkySportDE ??????? pic.twitter.com/gQihoVzY7P

Bellingham is the priority target, and Sky Germany’s Florian Plettenberg claimed on Thursday morning that the club are “still optimistic” they will secure a deal for the 19-year-old.

Plettenberg explained that “talks took place” but that the player “hasn’t yet spoken personally to Klopp,” with “no official offer” made.

“Liverpool offers him the possibility to become the new Steven Gerrard,” he added.

How much for Mbappe?!

The next Tyldesley and McCoist.

There seems to be a Premier League game every night these days, and this evening brings Man City vs. Tottenham, kicking off at 8pm on Sky Sports.