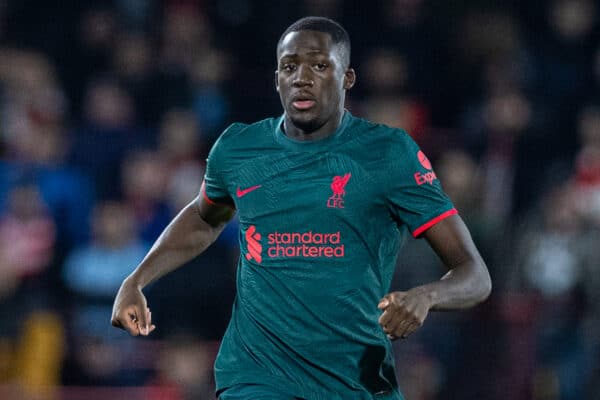 Brentford 3-1 Liverpool: Player Ratings – What the media and statistics say

Too many Liverpool players were poor a miserable 3-1 defeat to Brentford, as the same old issues hampered the Reds yet again.

A dire evening in west London saw Jurgen Klopp‘s men go behind after Ibrahima Konate‘s own goal and they never recovered from that point on.

Yoane Wissa doubled Brentford‘s lead before half-time – two goals were also ruled out thanks to VAR – in what was a horrible 45 minutes.

After the break, Alex Oxlade-Chamberlain and Bryan Mbeumo traded goals, on a day when there were almost too many negatives to mention.

Sadly, was a day to focus on the worst Liverpool players rather than the best, with so many struggling to cope with an inspired Brentford side.

Konate (4.3) had an awful evening for the Reds, not only scoring an own goal but also being muscled out of possession for Mbeumo’s strike.

The Frenchman received the lowest average rating, producing arguably one of the worst displays for Liverpool in the process.

TIA’s Jack Lusby felt Konate was “just too weak” for the third goal, adding that it was a “difficult night” for him in his first game back after the World Cup.

Next up was Harvey Elliott (4.4), who is really struggling to bring control and defensive work to Liverpool’s midfield at the momnent.

Ian Doyle of the Echo bemoaned a “poor mistake” by the 19-year-old for the second goal, as he produced a needless dummy in a dangerous area.

Virgil van Dijk (4.5) and Kostas Tsimikas (4.5) were seen as the joint third-worst players, with the pair both substituted at half-time.

Lusby criticised the former for “sleepwalking” before he was removed by Klopp, while FotMob pointed out that the latter won no tackles.

On a more positive note, Oxlade-Chamberlain (6.7) scored a well-taken header and got the highest rating, but even he was far from earth-shattering.

Liverpool’s next assignment is an FA Cup third-round clash with Wolves at Anfield on Saturday (8pm UK).