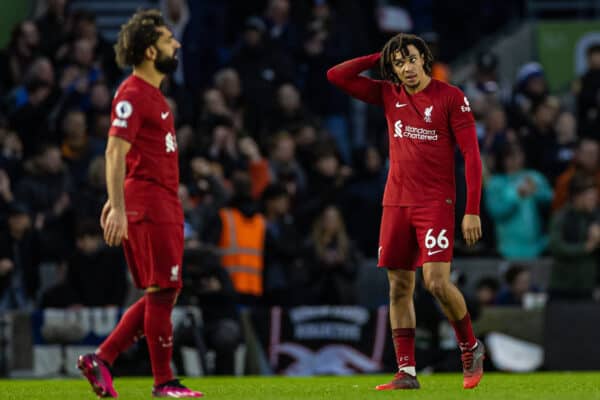 Liverpool were absolutely shocking as they fell to a 3-0 defeat at Brighton on Saturday, with Jurgen Klopp clearly struggling to stop the rot in his squad.

Heading to the Amex as underdogs, given their struggle for form and mounting injuries, Klopp set his side up in a slightly different shape, with Thiago as a No. 10 in a 4-2-3-1.

Cody Gakpo led the line as central striker on his Premier League debut, but all the traffic went the other way in the early stages as Brighton dominated – as, sadly, expected.

It took the Reds 23 minutes to get their first shot on goal, and though it came from Gakpo – and was, technically, on target – the chance was blocked and soon fizzled out.

Brighton embarrassed the visitors with their pressing game, while the dangerous Kaoru Mitoma was a constant threat on the left flank as he exploited a struggling Joel Matip.

Alisson and his defence were then let off as, despite Solly March being brought down inside the area, the winger was deemed offside and the penalty ruled out.

Within a minute of the restart – and with no changes to either side – Liverpool were deservedly behind, with Matip at fault as Mitoma raced through and set March up for a toe-poked opener.

March made it 2-0 with an exceptional finish soon after, with Evan Ferguson playing the perfect ball for his team-mate as Matip and Trent Alexander-Arnold both watched him drive into the space and fire home.

The energy did improve, and Gakpo had a half-chance thwarted by Robert Sanchez from Alexander-Arnold’s delivery, but Brighton then made it 3-0 through Danny Welbeck.

It came from a simple throw-in routine, with March flicking it on and Danny Welbeck bamboozling Gomez before shooting past Alisson to cap a humiliating afternoon.

With their 3-0 defeat, Liverpool drop behind both Fulham and Brighton into eighth in the Premier League.