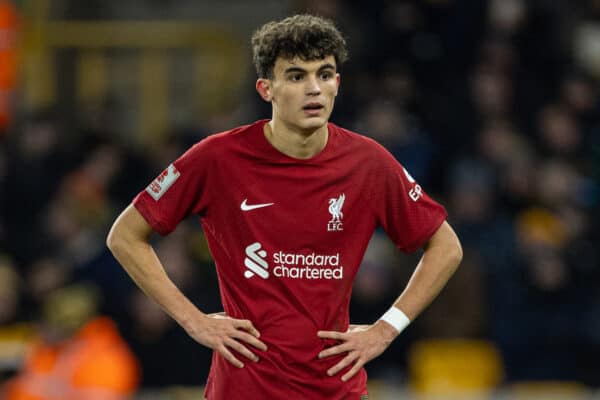 Jurgen Klopp has handed Stefan Bajcetic his first Premier League start for Liverpool’s clash with Chelsea at Anfield on Saturday.

After an impressive performance in the Reds’ FA Cup third round replay win over Wolves in midweek, the 18-year-old has been given the nod to continue at the base of the midfield against the Blues.

Klopp has made just three changes from the team that won at Molineux. Bajcetic starts ahead of Fabinho, with Jordan Henderson also missing out on a place in the midfield at the expense of Naby Keita. Trent Alexander-Arnold and Darwin Nunez are both on the bench.

The Times‘ Paul Joyce says Alexander-Arnold misses out on a starting spot having been suffering with a ‘minor muscle injury’ this week.

Alisson starts in goal having been handed a rest against Wolves.

James Milner continues at right-back. Ibrahima Konate and Joe Gomez continue at the heart of the defence, with Andy Robertson the only change to the back four.

The midfield is unchanged from Tuesday’s victory, with Bajcetic and Keita joined by Thiago once again.

Harvey Elliott looks to be starting on the right side of the attack, as he did at Wolves, with Cody Gakpo and Mohamed Salah making up the front three.

Fabinho, Henderson, Alexander-Arnold and Nunez are joined by the likes of Joel Matip and Alex Oxlade-Chamberlain on the bench, who also drop out from the Reds’ previous league match at Brighton.