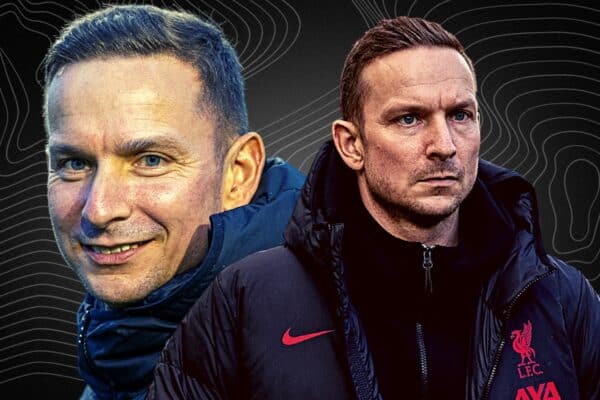 With Liverpool struggling for form and looking out of ideas, scrutiny has fallen on Jurgen Klopp‘s assistant Pepijn Lijnders. But is criticism valid?

It’s all gone a bit pear-shaped and no one knows quite where to turn.

When Liverpool have faced adversity under Jurgen Klopp in the past, mitigation has typically been within arm’s reach.

On this occasion, we’re simply left scratching our heads and bickering among ourselves.

The manager took Liverpool from the abyss back to the summit, getting a tune from a sleeping giant and bringing the good times back to Anfield.

He has immortalised himself at the club, a godlike figure among supporters, so when sticky patches come along it can be difficult for fans to compute.

Laying blame at the messiah’s door feels like an act of treachery.

Where does that leave us then? As football fans, our brains aren’t wired to simply accept a blip without explanation.

There has to, at the very least, be scope for finger-pointing, excuses, scapegoats, or a mixture of all three.

Football managers are the figureheads of football clubs, the ones who shoulder the blame in difficult moments and face up to the media before and after games.

When that person has, quite justifiably in this instance, banked the credit that Klopp now possesses, attention can sometimes turn elsewhere.

At the moment, that light appears to be shone towards Pepijn Lijnders.

The emergence of Lijnders the public figure

Liverpool’s assistant manager – a title he holds joint with Peter Krawietz – has become gradually more involved in the public-facing components of his role in recent times.

The Dutchman takes media duties for League Cup press fixtures and has taken to the hot seat himself in instances where Klopp has served bans and battled covid.

Then there is, of course, that book.

Released in August, Intensity: Inside Liverpool FC was initially greeted positively by fans, but as form has dipped it has increasingly been used as a way to highlight that he apparently ‘craves attention’ – something that seems hugely misguided and very conspiratory.

There are those who believe the book exposes tactical secrets that have contributed to success, while others simply don’t believe we should hear that amount of noise from a background presence.

Yet Lijnders still sits top of the bookies’ list of favourites to replace Klopp as the next permanent manager, something which supporters a year ago often commented and highlighted, with his press conferences being viewed as refreshing and energetic. How times change. Football fans can be fickle.

This potentially offers some insight into the origins of the supposition that his influence at Liverpool is escalating, a theory that many believe to be at the heart of the team’s current tribulations.

If the endgame is to eventually see the apprentice succeed the master, perhaps it is natural to see some scepticism surrounding this increased responsibility.

It is clear that Klopp implicitly trusts Lijnders, but that trust isn’t being extended by sections of the fanbase at present.

The book feels an appropriate place to start. What was intended to be a diary of the 2021/22 season, documenting the role each first-team member played in taking Liverpool to the brink of history, has instead stoked the fire and fuelled hypotheses and narrative.

Of all of the positions to take, suggesting that a book has had any part to play in Liverpool’s downfall feels the most irrational.

The idea that the club would sign off on a project that reveals any confidential details opposition sides could benefit from is far-fetched, to say the least.

Some complained that the writing of the book took focus away from 2022/23 preparations, discounting the fact the it was a written process throughout the season, rather than a summer body of work.

I dare say some of the complaints came from those yet to read a page.

There are plenty of things to be annoyed about at the moment – a book probably shouldn’t be one of them.

On Wednesday, a piece by the chief football writer at the Telegraph, was published claiming some of the decisions made by Lijnders since returning from a brief stint as manager of NEC Nijmegen in 2018, and highlighting the implications of affording a No. 2 such authority.

Predictably, this fuelled the fire.

The piece claimed that Klopp’s right-hand man often leads training, and while some might link that to an inevitable transition into management, the reality is that it is literally his job.

You could go back as far as Bob Paisley during his time under Bill Shankly, and you’d also struggle to find a man who took more sessions at Melwood than Ronnie Moran.

It is not only Lijnders who takes a focal presence in training, either, with Krawietz, Andreas Kornmayer, Vitor Matos and fitness coach Conall Murtagh all heavily involved.

Meanwhile, rumours circulated around the time of the Cody Gakpo signing that Lijnders played a more active role in the identification process than would usually be the case.

Wallace extrapolates those claims by indicating that Gakpo, Luis Diaz and Darwin Nunez have been brought in as a result of the Dutch and Portuguese connections accumulated throughout Lijnders’ career.

Those assertions have been connected to the departures of Michael Edwards and Julian Ward, and Jamie Carragher’s comments following the 3-1 defeat to Brentford were interesting in that they came from a former player who has experienced similar managerial structures.

He accused Liverpool of becoming “too technical” and offered the theory that the prominence of Lijnders within the setup could be a factor.

Carragher’s stance was reasoned and informed, demonstrating that the more extreme noise can distort the critical thinking that can be more fruitful in such scenarios.

Should it be a concern?

If we’re completely honest with ourselves, none of us really have a clue.

We have an innate desire to speculate, especially when things aren’t going to plan, but the reality is that the only people who truly know the extent of Lijnders’ role are the players and staff.

The performance levels of those on the pitch are quantifiable, but second-guessing what goes on behind the scenes is neither use nor ornament.

Should there be any truth to the speculation of the inflated control Lijnders now has over decisions then it is worth remembering that Klopp is still the man granting this power.

There are no Jedi mind tricks at play here.

If we’re happy to trust Klopp’s judgement in every other area then perhaps we should be minded to do so here.

Quite simply, if Lijnders has too much influence, it’s because Klopp affords him that influence and values his opinions – which we know is certainly true from Klopp’s own public comments about Lijnders.

The buck will continue to stop with Jurgen until 2026 and hopefully beyond; any prospective failings within his backroom team in that time are within his remit.

Speculation is and will always be part of being a football supporter. To remove this would be detracting from the experience we fell in love with in the first place.

In the meantime though, let’s stick with them, shall we?