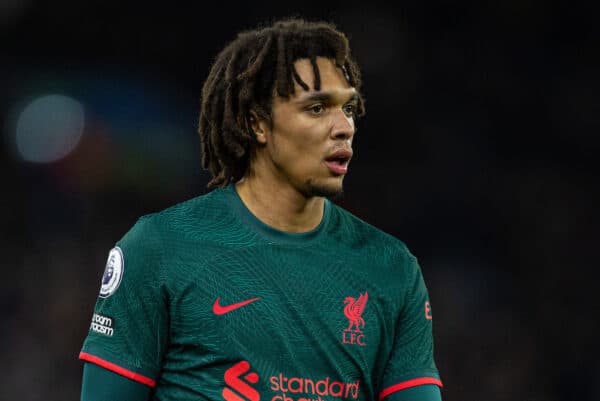 Seven points adrift of the top four and with points dropped in nine of the 17 Premier League games to date, it has been far from the electric and ruthless Liverpool we’ve come to know.

Trent Alexander-Arnold, though, is not ready to write off the season, one that has yet to reach the halfway stage.

There’s a myriad of issues at Liverpool’s door in 2022/23, with the midfield lacking fresh legs, the defence continually exposed and the constant need for a comeback after conceding first.

It’s cumulative for the Reds and it’s a stark contrast to the team that only last season was two wins away from a historic quadruple, it continued to set the bar extremely high.

Liverpool have not lived up to it and Alexander-Arnold is more than aware of the fact, but he’s far from ready to “write us off.”

“There’s a level of expectation now, it’s almost the saying of ‘being the victim of your own success’,” Alexander-Arnold told Sky Sports of Liverpool’s current form.

“People expect us to be immaculate every season and we’re not allowed to have off seasons, there’s a level of consistency that is demanded and I think we demand that of ourselves.

“It’s a season we’ve not been happy with but there’s still a long time left so I wouldn’t say write us off by any means.

“There will come a time when things click into place and we’ll be back to where we have been and when that happens then everyone will be happy.

“It’s just a matter of time doing that, we have to go back to basics and find where the problems are and try and use them to our advantage.

“Get back to what we know is Liverpool and playing like a Liverpool team.”

Alexander-Arnold’s words are not too dissimilar from those that have emerged from the Liverpool camp throughout the season, with seemingly everyone waiting for the penny to drop and the Reds to click.

We’ve had flashes but not consistency and the key is to, in Klopp’s words, remain “within punching distance” so that there is still something to fight for if and when the Reds find their feet.