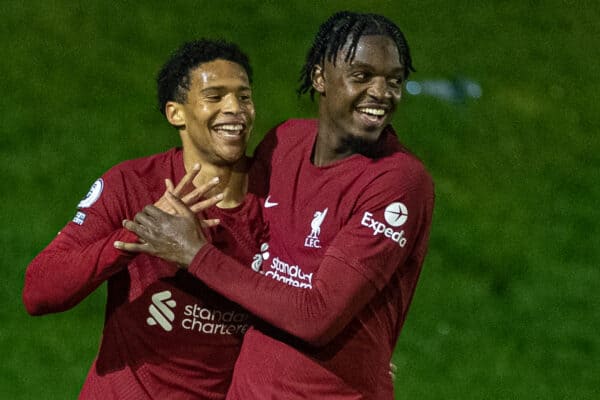 Footage emerges of Billy Koumetio’s outrageous goal vs. PSG – from his own half!

Billy Koumetio enjoyed the perfect night on his return for the Liverpool under-21s, including an outrageous goal from inside his own half.

Koumetio was due to spend the campaign on loan with Austria Wien, but after 11 appearances for the Vienna club his spell was cut short this month.

The Frenchman has now rejoined the academy ranks, and scored twice on his comeback on Wednesday night as the young Reds beat Paris Saint-Germain 4-2.

His opener was stunning, spotting Lucas Lavallee way off his line standing on the edge of the area and arrowing a 60-yard effort over the goalkeeper and into the back of the net.

Though the game was not broadcast live on TV, footage has now emerged of Koumetio’s goal – and it is every bit as impressive as onlookers made it out to be.

Luke Chambers made it 2-0 from the penalty spot before Koumetio secured his brace with a header, with Oludare Olufunwa adding a fourth before a late PSG fightback.

Speaking to reporters after the game, Liverpool U21s manager Barry Lewtas was asked whether he felt Koumetio intended to lob the goalkeeper.

“He said he did – and to be fair, the way he shaped up it looked like he meant it!” he replied.

“I’m not going to argue with him anyway.

“He nearly got his hat-trick as well. He’s a real threat, to be fair, especially from set-pieces.

“A real threat obviously with his size, but he uses his size well in the box. He’s got a lovely left foot.”

It had been speculated that Koumetio could head out again on another loan, but Lewtas has suggested he could now stay.

“He had a successful loan out there in terms of the exposure he got,” he added.

“Obviously there might be opportunities for others to go on loan and maybe just a little bit of an opportunity for him to reconnect with the club a little bit as well.

“The loans are just kind of fluid really, he’s had an opportunity to mix back in with us, play a little bit the way we play again in a back four.

“So we’ll just see where January takes us.”

Koumetio’s return to the ranks could pave the way for a move for Jarell Quansah, with Preston manager Ryan Lowe and Bristol Rovers boss Joey Barton both in attendance at the AXA Training Centre.

“He can only perform well and he can only do what he’s doing,” Lewtas said.

“Someone’s got to come for him, that’s the way it works really.

“He’s working ever so hard. His progress over the last 12 months, especially with the defensive line, he’s been brilliant.

“He’s worked ever so hard at his game, especially out of possession, controlling the line and being more of a leader.

“I thought the two of them were outstanding today.”