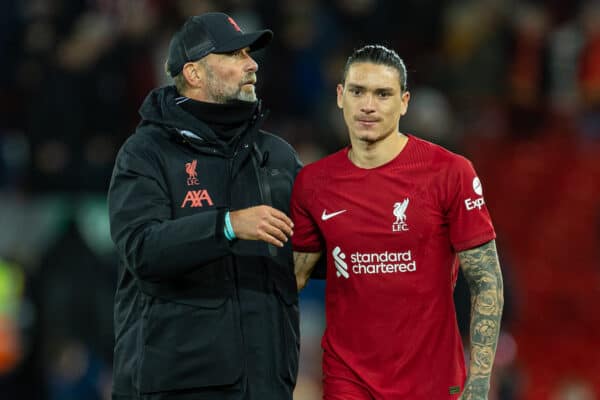 Jurgen Klopp admits it will be “necessary” to rebuild a Liverpool squad in transition, saying it was “one of the main reasons” he extended his contract.

Klopp added another two years to his deal back in April, committing his future to the club until at least 2026.

That came at the back end of a season in which Liverpool won both the FA Cup and Carabao Cup, as well as going the distance in the Premier League and Champions League.

But after coming so close to a historic quadruple, the Reds have fallen off dramatically this time out, with Klopp presiding over a squad of ageing stalwarts and high-potential young talents.

It is a group, the manager admitted on the Michael Calvin’s Football People podcast, that is in “transition” – but that process “needs time.”

“It was one of the main reasons why I signed a new contract, because I knew it’s necessary,” he explained.

“It will not go overnight.

“And imagine the situation now with another coach in the chair – I would be somewhere on holiday and everybody would shout my name, ‘with him it would not have happened!’.

“I’m obviously not a miracle worker.

“That’s why it’s good how it is, because all the problems you have in a transition time period – we have an awful lot of injuries, and that makes life really complicated – I have no problem with that because I see [the situation].

“I know the majority of the outside world is just interested in the short term but we have to be long-term focused as well, and that’s what we are.”

After their near-miss in the league and Europe last season, Liverpool’s net spend in the summer transfer window was just £27.6 million, with four first-team players in and five out.

That has now increased with the January arrival of Cody Gakpo, who will cost up to £44 million, but Klopp went on to explain that, without “endless money” like Chelsea, the club cannot “change overnight.”

“There are obviously plenty of different ways you can do it, but it’s all based on the situation you are in,” he added.

“Especially with the things happening around. Chelsea with the new ownership obviously, nobody knows exactly how they do it, how they can spend this much money.

“Other teams, nobody likes me talking about that…

“But transition needs time if you don’t have endless money, otherwise you can change overnight pretty much, bringing in 10 players.”