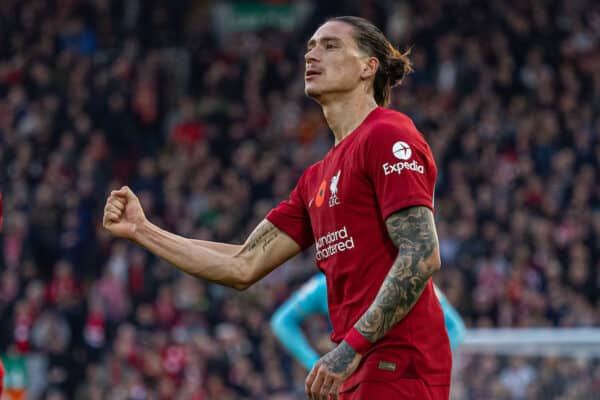 Darwin Nunez is fit and available for Chelsea‘s visit on Saturday after a brief stint on the sidelines with injury.

It left Cody Gakpo to lead the line at Wolves and take on a more prominent role in the Uruguayan’s absence, but we can count on the No. 27 against Chelsea, Klopp confirmed with a short one-word answer.

“Yes,” the manager said on Friday when asked if Nunez is available for Chelsea‘s visit.

Nunez returned to training during the week and will in all likelihood reunite with Mohamed Salah and Gakpo in the forward line.

It would be their second outing as Liverpool’s front three, their first and only start to date was in the 2-2 draw against Wolves.

The 23-year-old is Liverpool’s second-highest goalscorer this season, with 10 goals, and while he has missed plenty of chances too, he adds dynamism to the side that creates openings and chaos.

He will be one of a number of expected changes from Klopp after eight in midweek, although there are plenty of hands up for selection from the side that toppled Wolves in the FA Cup.

It’s not a selection headache, per se, for Klopp as it’s always better to have too many players to choose from than not enough.

“I never had one headache with selection, it’s now 1.45pm, training at 4pm, we have meetings and I get all my information then,” Klopp said on his team selection.

“So let me see if I get a headache or I get some information which will give me another headache.

“I’m completely fine, I hope they are all fit and ready. We will find a good team.”

Stefan Bajcetic could be one in contention, with Klopp saying it “doesn’t look like we have to be careful” with the midfielder after he suffered cramp at Wolves off the back of a minor hip injury.