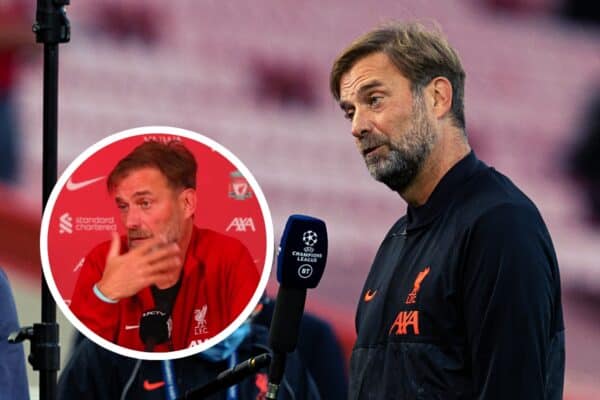 Jurgen Klopp can have the media eating out of the palm of his hand one minute, or be biting back the next, we’ve seen both already this season.

The Liverpool manager is one who does not publicly criticise his players and is quick to take the blame and put it on his own shoulders, it’s who he is.

“When something doesn’t go right, it’s my fault. When the players do well, credit to them,” Klopp has said more than once before.

Why is this relevant? Because for Klopp the only opinions that matter exist with those who “really care,” the ones “pulling in the same direction” and for the same cause.

The media, Klopp says, is not part of that circle.

Now we know that not to be particularly true such is the number of times he has referenced particular articles and headlines, but his view on the matter, in light of Graham Potter’s tough start at Chelsea, is fascinating.

“Twenty-two years ago when I became a manager, did we already have smartphones? No? Great times, eh?!” Klopp told reporters when asked if single-mindedness is key for a manager.

“So it means much less information, I analysed football games with a video recorder and then DVD – that’s how it all started.

“And when you wanted to know what the outside world is telling you, you had to ask somebody or read a newspaper.

“Good times, it was easy not to open a newspaper and if you don’t ask anybody, no one can tell you. So easy.

“I was always like this. I never had a problem with that.

“Everybody in this building [AXA Training Centre] can tell me pretty much everything, ‘do you really think you do this right, do that right’?

“But I’m sorry, for all of you [the media], I couldn’t care less. If you sit here or in front of Pep Guardiola, that is not a massive difference for you.

“Same problem, same question. Done. But there is no same problem.

“Pep cannot have the same problem as me so why should I really be concerned about what you are saying?

“There is no reason for it. But, of course, you influence the outside world and nowadays you have social media. Oh my god, all these people without any kind of knowledge are allowed to [post].

“[Before] people had to write a letter to the newspaper, can you imagine this process?

“You’re not happy with something so you take a paper and realise you cannot write properly, that’s the first challenge, you still do it and send it to the newspaper.

“They print it, I don’t know how long it took. Sometimes you read and think, ‘when was that’ and now [with social media] it’s a second [clicks fingers].

“I really think the best advice from a 55-year-old perspective is to ignore the outside world as long as they are not with you because if they have no clue about your situation, why would you ask them?”