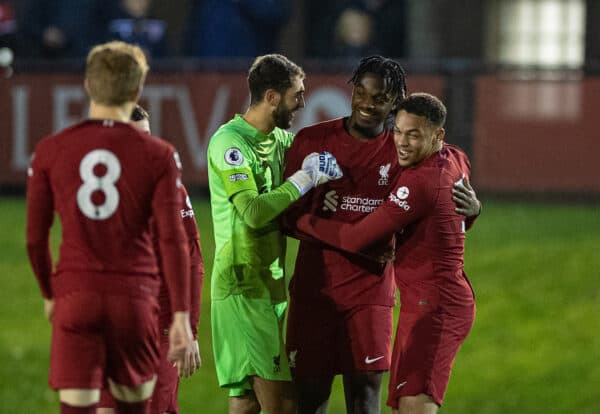 On his return from a loan spell, Billy Koumetio scored a wonder goal from his own half to set Liverpool on their way to a comfortable win over PSG.

Liverpool started in a 4-3-3 formation, with Lee Jonas shifted to left-back as Billy Koumetio came straight back in at centre-back after his loan spell with Austria Wien was cut short.

Among those watching from the stands was Preston North End manager and ex-Liverpool academy coach Ryan Lowe, who has been linked with interest in a loan move for Bobby Clark – but the young attacker was instead in action for the Reds’ Under-18s in the FA Youth Cup at Port Vale.

Also missing were Stefan Bajcetic and Ben Doak, with injury affecting the former, while Kaide Gordon was not yet ready to return to action.

It wasn’t long before Koumetio marked his return as, after eight minutes, he scored the best goal of his young career to date – and likely future career!

With PSG ‘keeper Lucas Lavallee off his line, the Frenchman took aim from inside his own half and lofted the ball magnificently into the top corner of the goal, leaving the ‘keeper as surprised as Koumetio himself.

It was a strike the watching John Barnes would have been proud of.

Twenty minutes in, Mateusz Musialowski won a penalty when he was brought down in the area after dribbling around the ‘keeper.

Luke Chambers made no mistake from the spot, calmly placing his penalty down the middle, and before the half was out, Koumetio had added a second with a well-placed header, rising above his marker six yards from goal before nodding in at the near post.

This time, it was 21-year-old right-back Oludare Olufunwa who scrambled the ball over the line when an inswinging corner was nodded down to the back post area.

Around the same time, Dominic Corness and Luca Stephenson both came off as Oakley Cannonier and 16-year-old Kieran Morrison took their places in midfield.

Liverpool then suffered another concentration lapse at the death as substitute Noah Lemina netted a second to put a dent in the result.

It mattered not though as the result means Liverpool have now won two from two in the Premier League International Cup. It’s same time and same place for the U21s next week as Braga visit the academy.