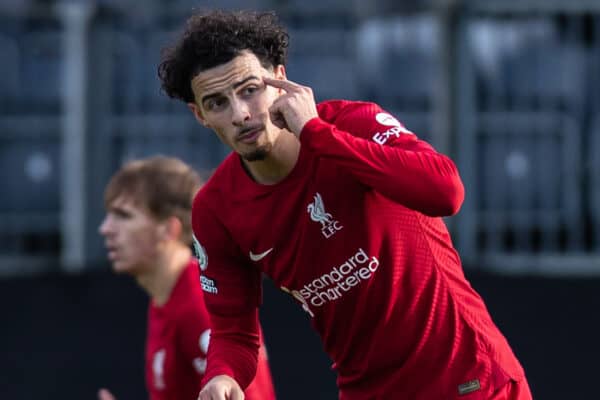 Curtis Jones made a rare start for the Liverpool under-21s on Sunday, with coach Barry Lewtas explaining the plan behind his 45-minute outing.

Within the current rules for the U21s league, clubs are able to field up to five ‘over-age’ players in any given fixture.

Already this season this has seen Arthur and Nat Phillips build up valuable minutes, but for Jones, that stipulation was not required, as he remains eligible as an U21s player.

That perhaps shows the patience required for a midfielder who, despite making 82 appearances for the first team over five seasons, doesn’t turn 22 until later this month.

Still, it was jarring to see Jones take his place in the middle of the park alongside Dominic Corness and Bobby Clark as the U21s took on Tottenham.

“It was just to give him minutes,” Lewtas told The Athletic.

“Curt has been unbelievably unfortunate with injuries and sometimes it’s just a good opportunity to get the shirt on.

“It’s not Anfield, but putting the kit on and playing against people who want to tackle and chase you, you can’t replicate that sometimes.”

Due to ongoing injury issues, Jones has only played eight times for Jurgen Klopp‘s senior side this season, making the bench a further two occasions including the 3-1 loss at Brentford on January 2.

With Liverpool experiencing a midfield crisis, it has been far from helpful that a player once considered the heir to Gini Wijnaldum‘s throne cannot string a run of games together.

But with Klopp watching on in an unfortunate 2-0 loss to Spurs that saw Calvin Ramsay sent off in the first half, Jones was able to clock 45 minutes on the pitch.

Both Jones and Ben Doak were substituted at half-time, with Klopp departing soon after, and as Lewtas explained, this was pre-planned.

“For Curt, it was always an idea of he was only going to get 45,” he continued.

“And it was just a really good chance for him to run around and blow some of the cobwebs off.”

Whether this translates to a place in the side against Brighton on Saturday remains to be seen, but having a fit-and-firing Jones available would certainly be a boost.