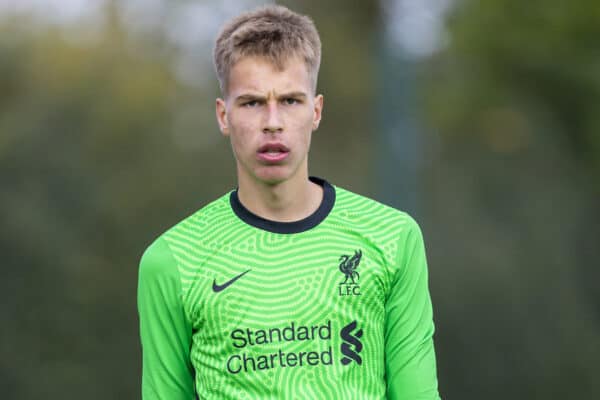 Liverpool have confirmed the return of academy goalkeeper Jakub Ojrzynski from a frustrating loan spell with Radomiak Radom that saw him play three times.

Ojryznski made the move back to his native Poland in June, as he joined a Radomiak side that finished seventh in their first season back in the Ekstraklasa.

The 19-year-old only featured sparingly under Mariusz Lewandowski, however, with another loanee, Gabriel Kobylak, preferred as first-choice goalkeeper.

After three appearances in the first half of the campaign, the writing was on the wall when Ojrzynski was omitted from the Radomiak squad travelling to Turkey for a mid-season training camp while returning loanee Albert Posiadala took his place.

It was then confirmed on Tuesday evening that Liverpool had terminated the deal to allow their youngster to return to Merseyside.

Ojrzynski is signed to a long-term contract at Anfield, and it could be that he now stays with the under-21s for the second half of the season.

That is expected to be the case with both Billy Koumetio and Max Woltman, who were already recalled from their loans at Austria Wien and Doncaster Rovers respectively.

It comes as part of a reshuffle of the academy ranks which has also seen U21s captain Jake Cain follow former team-mate Tom Clayton to Swindon Town.

Cain, who had been with Liverpool since the age of nine, opted to join the League Two side on a permanent basis, penning a two-and-a-half-year contract after Swindon paid an undisclosed fee.

He is unlikely to be the last youngster to leave in January, with the Reds believed to be weighing up temporary deals for the likes of Jarell Quansah and James Norris.

Whether any more loanees will be recalled, however, remains to be seen, with there a chance Marcelo Pitaluga‘s stint at Macclesfield is brought to an end in order to find a club higher up the Football League.

No movement is expected for Tyler Morton or Conor Bradley, while Leighton Clarkson has been tipped to stay with Aberdeen despite interest from QPR, West Brom and Reading.