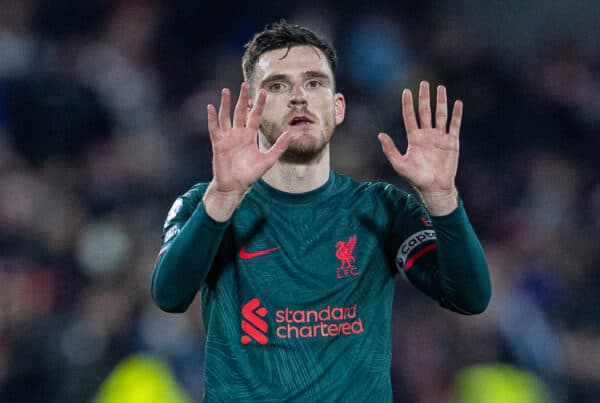 Liverpool “just not getting it” despite “kick up backside” – Andy Robertson

Andy Robertson feels it’s “one step forward and one step back” for Liverpool after they backed up one poor performance with another at Brentford.

Despite a win in the final game of 2022, the honest view was that the performance against Leicester “wasn’t good enough,” and just days later nothing had changed.

Brentford put pressure on Liverpool’s weak spots and found joy, the deserved “kick up the backside” from Friday did not see the light of day in the 3-1 defeat.

Robertson, who led the team after his half-time introduction, did not shy away from the performance post-match, with the Reds’ talks off the pitch not translating to change on it.

“With the fans sitting at home or on the bus back up to Liverpool, it’s not good enough for them,” Robertson said.

“We’ve spoken about consistency and things like that but we’re not getting it.

“It feels like we’re one step forward and one step back at the moment, which makes it hard to climb the league table, unfortunately.

“First half we were second to every ball, no real runs in behind. We have to be first to the ball in the box, we have to be more aggressive in our own box.

“That performance [against Leicester] should have been a kick up the backside where we say ‘right, we’ve won but now we need to put in a better performance’.

“Three days later we put in another bad performance.”

And it was not as if Liverpool did not know what to expect from a plucky Brentford, Robertson said as much to Viaplay Football: “We didn’t do what we were supposed to.

“When you add all those things up, you’re never going to get a result at this place.

“We knew what Brentford are good at, it’s not hard to work out but they’re very consistent – we were prepared for what to expect but, obviously, we just struggled with it.

“Set-pieces were a huge weapon for them, it’s hugely disappointing from our point of view to go in at half-time 2-0 down, you’re fighting an uphill battle.

“We tried, first 15-20 minutes of the second half I thought we pushed well, got a goal, half chances and then we started committing bodies forward and got hit on the counter.

“I don’t think we can have complaints where the three points went, I think Brentford deserved it.”