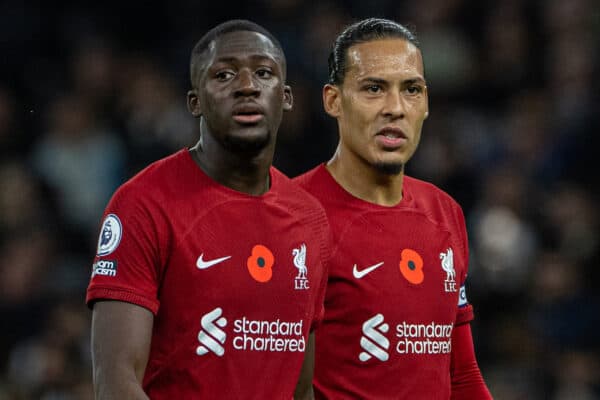 Liverpool lineups vs. Brentford with Konate and Keita returns possible

Liverpool take on Brentford in their first game of 2023 on Monday night, with Jurgen Klopp likely to make at least one change to his starting lineup.

The Reds scraped through their 2022 closer at home to Leicester, but came away from their 2-1 win with two more injury concerns to add to the list.

That does not help matters when a trip to mid-table Brentford awaits on Monday, with Thomas Frank’s side on a run of five games without defeat and on the back of a 2-0 win at West Ham.

Klopp could include a new face in his squad in west London, though it still remains to be seen whether Cody Gakpo will be eligible as Liverpool await clearance following his £44 million move from PSV Eindhoven.

But with four consecutive Premier League victories, the Reds should head to Brentford confident of making it five in a row.

Following the 2-1 victory over Leicester, we know the following:

Liverpool were dealt a relatively kind schedule over the festive period, and were given three days between fixtures this time around.

That should have allowed the majority of Klopp’s squad from the win over Leicester to take in recovery time and prepare for another high-intensity clash.

Fabinho‘s expected return is a big boost, too, while the hope is that Robertson will be able to start despite a dead leg forcing him off at Anfield:

With those alterations from Friday’s win, Liverpool would line up like this:

It is safe to say that heading into this tie the left flank is Klopp’s biggest issue, with Robertson’s fitness and the impact of both Carvalho and Oxlade-Chamberlain a concern.

But there are solutions within the squad, even without Gakpo, and the prospect of Firmino’s return to the fold is a significant one.

Klopp could also consider a change in midfield following Henderson’s shaky showing against Leicester, with the option of a first start of the season for Naby Keita:

Those changes would see this Liverpool XI:

Even if Gakpo is eligible, the Dutchman is unlikely to play a major role against Brentford, with a lack of training time after the World Cup making the FA Cup tie against Wolves a more feasible introduction.

But despite new injuries threatening his squad, Klopp could see an increase in his squad options from Monday – with it certain to be a strong Liverpool lineup.