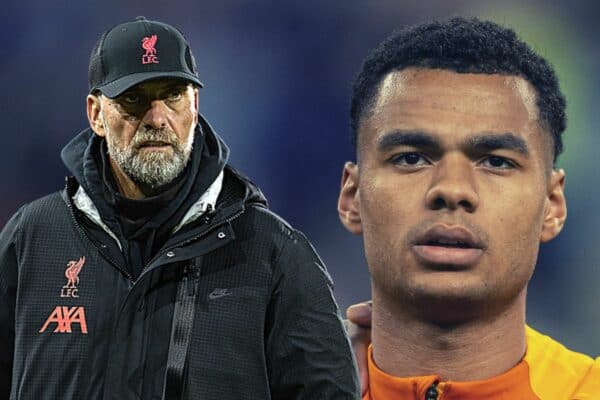 Liverpool lineups vs. Wolves: Gakpo full debut or sub – and how many changes?

Cody Gakpo is set to make his Liverpool debut as the Reds begin their defence of the FA Cup with a third round tie against Wolves on Saturday, and Jurgen Klopp is facing some tricky decisions with his team selection.

Having joined the club ahead of the January transfer window, Gakpo was unable to feature in the defeat to Brentford earlier this week, with the formalities of the transfer not completed.

But with the necessary paperwork finalised on Tuesday, the Dutchman has been able to train with his new team-mates in recent days, and is in line to make his first appearance for the club this weekend.

Klopp may have previously identified this game as an opportunity to give some of his fringe players minutes, but given Liverpool’s poor form, and the fact they have a week between matches, he says he will field a strong team against a Wolves side showing signs of improvement under Julen Lopetegui.

Here, we look at two possible ways the Reds could line up.

From Jurgen Klopp‘s pre-match press conference on Friday, we know the following:

With Van Dijk facing a spell on the sidelines, Joel Matip, Ibrahima Konate and Joe Gomez will be asked to step up in the coming weeks.

Having had five days to prepare for this game, and with another week until the Reds’ next match against Brighton, Klopp looks set to name something close to a full strength team.

Gakpo is probably most likely to make his debut from the bench, having only began training at the AXA Training Centre several days ago.

If that’s the case, Liverpool could shape up as follows:

If that’s the side Klopp decides to go with, this would be the Reds XI:

However, given the way Klopp spoke about Gakpo’s first few days of training in his pre-match press conference, there’s certainly a chance that the winger could be thrown in from the start.

Klopp may also be tempted to hand Thiago a rest, with the Spaniard starting all of Liverpool’s matches since the resumption of their season in December.

Here’s an alternative way Liverpool could line up:

While Klopp may have been tempted to ring the changes, he will now know this is a game Liverpool simply cannot afford to lose.

Realistically, the FA Cup is now surely their best chance of silverware this season, and after such a poor performance at Brentford, they are in desperate need of some momentum.

Let’s hope Gakpo can give the Reds a lift!