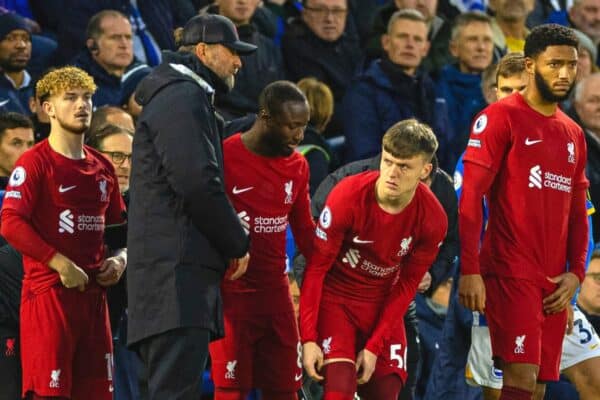 Liverpool lineups vs. Wolves: Klopp to make changes, but how many?

After a humiliating 3-0 defeat to Brighton on Saturday, Jurgen Klopp has confirmed he will rotate his squad for Liverpool’s FA Cup third round replay at Wolves.

The Reds at least have the opportunity to get such an embarrassing performance out of their systems quickly, with the trip to Molineux coming just three days later.

Such a short turnaround will also leave Klopp with some decisions to make with regards to his team selection.

A number of Liverpool’s senior player looked jaded at the Amex, and with an important home meeting against Chelsea on the horizon next weekend, the boss says he will make changes on Tuesday.

But go too weak and Klopp will be risking another poor result against a Wolves side on the rise under Julen Lopetegui.

Here, we take a look at how Liverpool could line up on Tuesday night.

From Jurgen Klopp‘s pre-match press conference on Monday, we know the following:

Klopp took full responsibility after selecting a team and formation that simply did not function against Brighton.

So with the boss set to freshen up his team, Joe Gomez, Harvey Elliott, Naby Keita and Curtis Jones are perhaps the likeliest players to come in.

If those four start, the Reds could line up like this:

However, Klopp certainly wasn’t shy about the idea of rotation in his pre-match press conference, and after such a forgettable performance on the south coast, there is the possibility that he could make wholesale changes.

Despite Liverpool’s persistent injury issues, they do still have the option to change up the vast majority of the starting XI.

If Klopp decides it’s time to completely freshen things up, the following changes could be made:

Those changes would leave the team looking like this:

If there is a single positive to take from the defeat at Brighton, one is perhaps that Liverpool’s performance level surely can’t get any worse.

Yes, Klopp’s squad has been crippled by injuries for most of the season, but he must find a way to allow some of the players who are fit and available to flourish.

Let’s hope some fresh legs will result in a much improved performance on Tuesday night.