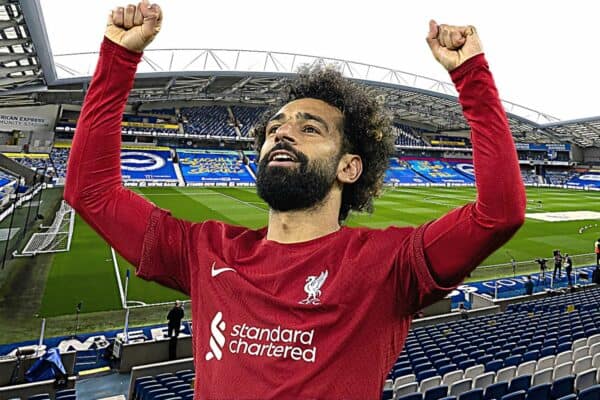 Liverpool must improve away record as Mo Salah eyes 3 milestones vs. Brighton

Liverpool go into Saturday’s trip to Brighton looking to improve an underwhelming Premier League away record this season.

The Reds have taken just eight points from away matches this season, with their only victories coming at Tottenham and Aston Villa.

They have kept just three clean sheets in the last 18 games played away from Anfield in all competitions.

In total, Liverpool have scored 11 times away from home in the league. After the same number of games on the road last season they had scored 26.

The Reds have won all 11 games when they have scored the first goal of the game this season.

Liverpool are unbeaten at the AMEX, having won five of their six visits in all competitions, only failing to win in a 1-1 draw in November 2020.

They have won four of five Premier League visits to Brighton – drawing the other. In those meetings they have scored 12 and conceded three.

In the league, Liverpool have lost just three of the 27 meetings between the teams down the years and have won 20 of the 36 encounters in all competitions. In those 36 meetings Liverpool have failed to score only four times.

The Reds have scored in all but two of their 17 visits in all competitions.

Liverpool’s only ever league defeat to Brighton came on this day in 1961, going down 3-1 on the south-coast.

Mo Salah could play the 300th game of his career for an English club – his first 19 came while wearing the colours of Chelsea.

He needs one goal to become the Reds’ leading scorer against Brighton. He is currently on six, level with Kenny Dalglish.

Should the Egyptian find the net, he will become the Reds’ leading scorer away from home in the Premier League era. He is currently on 55, alongside Michael Owen.

Liverpool need two goals to record 850 in all competitions under Jurgen Klopp.

Virgil van Dijk’s injury now leaves Alisson as the only Liverpool player to appear in every minute of Liverpool’s current league campaign.

Andy Robertson’s first goal for Liverpool came against today’s opponents in a 4-0 Anfield victory in May 2018.

Brighton have not kept a clean sheet in their last seven Premier League games; nor have Liverpool.

Their last three league games have produced a total of 15 goals, with Albion scoring nine.

Going into this round of fixtures, only Man City, Arsenal, Tottenham and Liverpool have scored more times than Albion.

Albion have scored two goals fewer than Liverpool in the league this season while conceding three more.

Adam Lallana has lost one of only five appearances against Liverpool in a Brighton shirt – this fixture last season.

A Brighton win would take them above Liverpool in the table.

They have scored nine goals in their last two games, away wins at Everton (4-1) in the league and in the FA Cup at Middlesbrough last Saturday (5-1).

Darren England takes charge of Liverpool for the first time in Premier League.