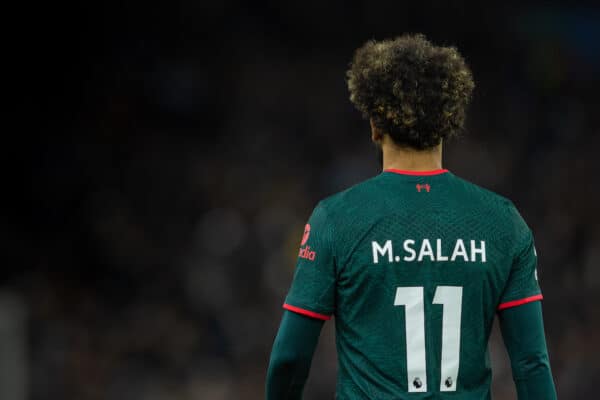 There are more records in sight for Mohamed Salah as Liverpool visit Brentford this evening, including one currently shared with Michael Owen.

Should Salah score he will become the Reds’ leading scorer away from home in the Premier League era.

He is currently on 55, alongside Owen.

A goal from Salah would also see him become Liverpool’s seventh highest scorer of all-time. He has 172, level with Kenny Dalglish.

In this meeting here last season Salah scored his 100th league goal for the club in his 151st game. His current tally stands at 125.

Liverpool are aiming for a third successive away league win for the first time since May 2022.

They could win a fifth league game in a row for the first time since April 2022, when they won 10 on the bounce.

Since 1954, Liverpool have played 15 times on this date, winning eight and losing just once.

Adrian was in goal for the opposition in that 2-0 defeat at West Ham in 2016.

Seven of Brentford‘s 13 league wins last season came at home, while this season they have won three of their eight top-flight fixtures at the Gtech Community Stadium.

Their sole defeat in eight home games came when losing 3-0 to Arsenal in September.

However, they have not won in the last three on home soil drawing 0-0 with Chelsea, 1-1 with Wolves and 2-2 with Tottenham.

They have not had a longer top-flight undefeated run since a sequence of six from February to March 1939.

They last lost on October 23, when they were beaten 4-0 at Aston Villa.

The 2-0 win at West Ham three days ago saw them keep a first clean sheet in seven games in all competitions.

Sergi Canos made one senior appearance for Liverpool during his three years at Anfield – as an 80th-minute substitute in a 1-1 draw at West Brom on the final day of the 2015/16 season.

Last season he had the honour of scoring Brentford’s first-ever Premier League goal.

Stuart Attwell took charge of the 3-3 draw between the teams on this ground last season.