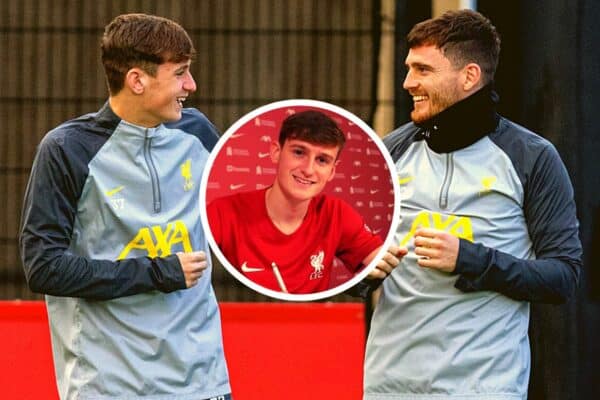 After Liverpool confirmed a new contract for Tyler Morton on Wednesday, a host of his team-mates have taken the opportunity to congratulate him on social media.

The 20-year-old midfielder, who is enjoying a fruitful loan spell in the Championship with Blackburn this season, has now put pen to paper on a long-term Liverpool deal.

Jurgen Klopp and several Liverpool players spoke highly of Morton in his breakthrough campaign for the club last season.

And the fact he has been handed a new contract midway through this season would suggest he is in line for plenty more opportunities in the years to come.

In his latest post on Instagram, Morton said Liverpool was a club that meant “everything” to him, thanking those who have “guided him in the right direction” for their support.

Among those to congratulate Morton on his new deal was Andy Robertson, who commented “Love it son.”

Jordan Henderson and Caoimhin Kelleher were some of the other senior Liverpool players to pass on their best wishes, with Harvey Elliott, who has formed a close relationship with Morton, commenting “Deserve it bro.”

Stefan Bajcetic, who has benefited from Morton’s loan at Blackburn with his own opportunities in Liverpool’s first team, was among the others to congratulate him, as were Kaide Gordon, Bobby Clark, Harvey Davies and Conor Bradley, who has also flourished on loan in the Football League this season.

When asked how he had benefited from his time at Blackburn, Morton said he feels he has been able to develop the physical side of his game.

“I think physicality is the main one for me,” he told Liverpoolfc.com.

“I think I’ve been questioned on that in recent years because of my stature and stuff like that. But I think I’ve coped with it extremely well.

“I needed that to go out and enjoy my footy – get smashed about and just enjoy the rough side of the game. I’ve done that and I’ve coped with it very well.

“Now I’m maturing as a footballer and I’m going to look to carry on progressing.”

With 28 appearances to his name so far this season, including 22 starts, Morton’s focus for the rest of this term will be on helping Blackburn to push for promotion from the Championship, with John Dahl Tomasson’s side currently third in the table.