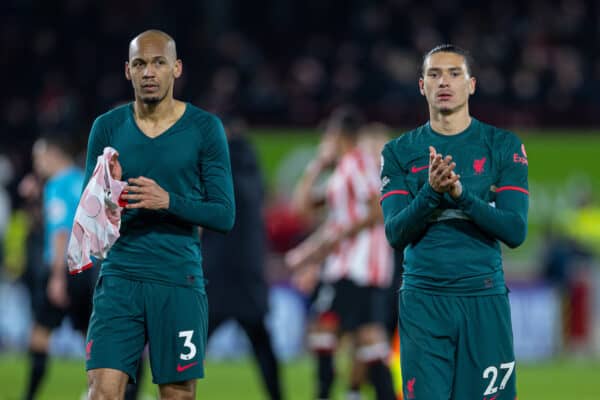 Liverpool fans voiced their displeasure at Liverpool’s woeful 3-1 defeat to Brentford in the Premier League on Monday.

The Reds opened their account for 2023 with a trip to west London, in a fixture that looked an awkward one from the off.

It proved to be exactly that, with Liverpool 2-0 down at half-time after an Ibrahima Konate own goal and a Yoane Wissa header.

Alex Oxlade-Chamberlain reduced the arrears with a header of his own early in the second half, but Bryan Mbeumo ended the visitors’ misery late on.

It was a dire day at the office for Jurgen Klopp‘s side, as their top-four hopes took a severe blow.

Some feel Liverpool need more than just a midfielder…

Liverpool haven't kept a clean sheet in 7 league games and have conceded first in 50% of games this season.

You can complain about midfield all you like but the problems aren't restricted to just midfield.

Inability to deal with what is Brentford's main tactic is dumbfounding. #LFC were playing well until they went behind but have collapsed since. Mountain to climb in second half and, frankly, don't think there are the ideas on the pitch (or on bench) to do so.

Destroyed in transition. Destroyed on set pieces. Lucky it’s only 2-0. LFC abysmal Don’t understand Harvey Elliott role at all. Kills the space for TAA and Salah and an absolute passenger in transition

It needs saying… Liverpool have been poorly coached this season. Continually outthought, even in games we’ve won. That they had 4/5 weeks to work on things mid-season and appear to have got worse is damming. A disgraceful performance up to now.

Incredibly disappointing from LFC to begin 2023 with a performance that reminds everyone of their midfield inadequacies & potential to be bullied by well organised, energetic teams.

Something you *never* used to be able to level at this group.

Happy New Year & all that.

“Unfortunately not just midfield. Tactics also need to be tweaked” – Dabest on Facebook.

“Out of ideas and out of intensity” – Lord Origi in the comments section.

“Bottom line we couldn’t match Brentfords energy. Similar with every team we’ve played this season. Theyve out faught us in every position on the pitch. A distant memory from the team a few years ago that used to completely over run teams, press teams high and bully them. Now it’s a slow midfield that as a combined unit, miles off the level required.” – John Gardner on Facebook.

There isn't a central midfielder on the planet that Liverpool could sign to solve all these issues. An utterly shambolic 45 minutes following on from poor performances against Leicester and Villa that somehow weren't punished. Jurgen Klopp should not be immune from criticism.

Worst thing about this defeat is thats its surprising isnt it? Bullied

Liverpool used to have one of the best defensive, off-ball setups in the league. What happened last summer to change that?

Will the real Jurgen Klopp please stand up?

Yes we need midfielders but you cant look at that game on its own and say thats the reason we lost we were poor all over. Take me back to when we had 3 workhorses in midfield that could run and bullied teams with our intensity.

Others assessed the top four race, with plenty of negativity on show…

Embarrassing performance and a total lack of leadership, fight and hunger shown. A huge opportunity thrown away.

Top four isn't done, but Liverpool look so physically washed, ignoring tactical issues, that it's hard to have any confidence. There's January window, true, but they have form in ignoring crises'

You can't start games the way we do on a regular basis and expect to keep getting away with it.

4 points off 4th having played a game more is some fall from grace.

“Well that was truly horrific. The four wins on the bounce gave us all false hope, the problems are far bigger than we thought. The most fitting post I’ve read this season is Arsenal have turned into Liverpool and we have turned into Arsenal.” – iverhardy in the comments section.

We don’t deserve top four. Let down on and off the pitch

This team is a joke. No chance of top four. Years and years of underinvestment have finally caught up with us. Just make it to the summer and go again – if the owners won’t invest they have to go. This team needs a complete overhaul #LFC #YNWA

Continue like this and you can kiss goodbye to Champions League next season. Is a stretch as it is!

A dreadful start to the new year.