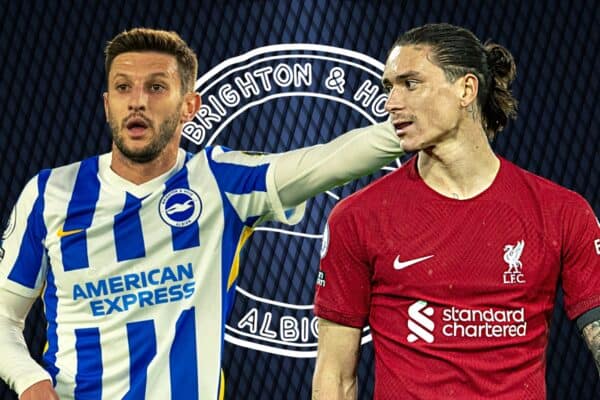 Potterball with “afterburners,” Caicedo “perfect” & how Liverpool can expose Brighton

Brighton have the potential to cause Liverpool huge problems this weekend, with the Roberto De Zerbi era now in full swing.

The Reds have had a week to prepare for Saturday’s trip to the Amex Stadium in the Premier League – hopefully, they’ve made some progress on the training ground.

Last weekend’s 2-2 draw at home to Wolves in the FA Cup third round was Liverpool’s latest poor performance, with the same issues haunting them again.

If there aren’t sizeable improvements on Saturday, Jurgen Klopp‘s side could easily drop more points on the south coast, having drawn 3-3 at Anfield back in October.

Ahead of the game, we spoke to Brighton fan and football finance expert Kieran Maguire (@KieranMaguire) to hear about the Seagulls’ season, Liverpool’s woes and much more.

Solid. Results have been highly unpredictable.

Brighton are capable of stuffing Chelsea and Arsenal, but have struggled at home to Nottingham Forest and away to Charlton.

Some of the football has been superb and the culture at the club is very inclusive and positive, which has given players the confidence to express themselves.

How happy are you with the appointment of De Zerbi?

I am delighted with Roberto De Zerbi, he has taken the best bits of “Potterball” and added afterburners.

We can score or concede three or four goals in a single game, achieving both at Anfield earlier in the season.

His role is that of a coach and he has ensured we play positive, risk-taking, possession-based football, but we are probably more willing to shoot than under Graham Potter.

Consequently, we have scored more goals away from home than any club in the Premier League this season.

The only downside is that home form has been poor – we are better when the emphasis is on the opposition to dominate the game.

What has he changed stylistically from Potter?

Our play is less measured, even though we try to walk the ball into the net at times, just as did when Potter was in charge.

He has been willing to give young players a chance, partly out of necessity, but it has been encouraging to have three attacking players aged 19, 20 and 21 playing recently.

Alexis Mac Allister has to be mentioned – I never thought 25 years ago that I would see a Brighton player at a World Cup, let alone winning it.

He can play in front of the back four, but also in a more forward role – the way the club welcomed him back following the World Cup is indicative of the forward-thinking nature at the Albion.

Evan Ferguson has made a great start, too. He is an old-school number nine in many regards, but fast, has good control and is a handful for defences.

Before the World Cup break, Leandro Trossard was on fire, and not just because of the hat-trick away to Liverpool.

He is a box of tricks, but inconsistent. Sadly, since returning, his form has fallen off a cliff, which could be due to his contract expiring in six or 18 months.

It is unclear if the club have triggered his one-year extension and he shows no interest in staying beyond that date, which is such a shame.

Solly March again has a foot in both camps. Both coaches this season have nearly always played him, but his finishing can be woeful.

At Charlton, he dribbled past six players, then put it yards wide with just the keeper to beat, and trumped that with a penalty in the shootout that is a danger to low-flying aircraft!

But, March then followed that with a superb goal at Southampton from 25 yards out, which sums up his unpredictable finishing.

Do you think Caicedo would be an ideal fit at Liverpool?

Moises Caicedo would be perfect for Liverpool.

He wins tackles that he shouldn’t, has a big engine so can press for 90 minutes and is always happy to shoot, too.

The only issue is that he picks up too many yellow cards.

As for the Reds, how do you assess their campaign to date?

Clearly, Liverpool have not reached the expectations of many fans – I’m not qualified to pinpoint why!

I do, however, get the impression that, like Brighton, they can score and concede in equal measure, whereas in the past few seasons, they were always associated with a very tight defence and being clinical at the other end.

I can see Liverpool going on a run of 10-12 games without defeat, though, allowing them to move up the table.

Arsenal and Man City appear to be dead certs for the Champions League places, but the other two spots are up for grabs.

I think Liverpool will finish fourth and Brighton will end up ninth.

Which Reds player would you most like to have at Brighton, and why?

We were trying to sign him before he went to Benfica, but for some reason, he preferred the Champions League to a match against Crystal Palace being the biggest one of the season.

Still, I think he will come good for Liverpool.

Looking ahead to Saturday, what are the key battles?

Midfield and out wide will be interesting.

March and Kaoru Mitoma are both in good form for us at present.

Meanwhile, Adam Lallana is in the best form since coming to the Amex, and both Mac Allister and Caicedo are in many regards undroppable in their present form.

If Liverpool turn it on in attack, they will expose our lack of pace and we are susceptible to long diagonal balls.

And finally, what’s your prediction?

I am expecting goals, as attack is better than defence for both teams.