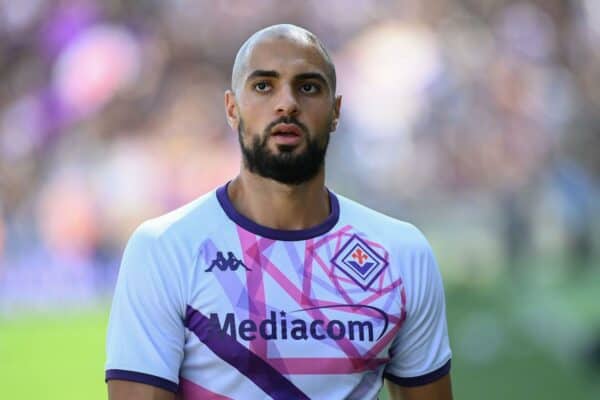 Sofyan Amrabat was heavily linked with a move to Liverpool this month, but now rumours have gone quiet with a new club touted for the midfielder.

Throughout the World Cup, Amrabat was continually reported as a target for Liverpool, as he excelled in a Morocco side that made it to the semi-finals.

A relentless, tough-tackling midfielder, the 26-year-old was seen as a viable addition to Jurgen Klopp‘s ranks, with a deal worth around £25.8 million mooted.

But after claims that Klopp had held meetings with the players’ representatives – including brother Nordin Amrabat, a former Watford winger – links between Amrabat and Liverpool have died down.

Unsurprisingly, this has coincided with the conclusion of the World Cup, in which Morocco finished fourth after losing the third-placed playoff to Croatia.

Now, according to Foot Mercato, with word from Moroccan journalist Hanif Ben Berkane, Amrabat has set his sights on a transfer to Atletico Madrid instead.

This comes after the Fiorentina midfielder discussed “at length with those around him to choose the best sporting project.”

Atletico are said to “tick all the boxes to allow him to continue his progress,” though it is maintained that a sizeable fee would need to be agreed to secure any deal.

Tottenham are also credited with an interest in Amrabat, but he now appears more likely to follow through with his praise for Diego Simeone’s side and push to join them.

Speaking to Marca during the World Cup, he expressed his admiration for Atletico and admitted: “It is a great honour to be associated with these types of clubs.”

“I have a great coach at Fiorentina. I don’t like to talk about others,” he began.

“But yes, what Simeone does, what he has achieved…he has coached Atletico Madrid for many years.

“I like his style of play. He has won a lot and I have a lot of respect for him. The players on his team are physically strong and aggressive. I like to play that way.”

From a Liverpool perspective, it seems likely that there never was any concrete interest, and that the club was used to fuel the rumour mill and attract offers from elsewhere.

There are doubts over whether Amrabat would have been the right fit for Klopp’s midfield, though it is hard to argue that he would not have at least been a boost.