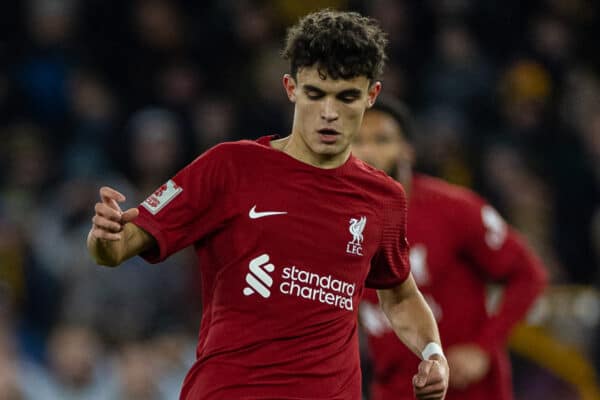 Stefan Bajcetic to be fast-tracked into Spain U21 squad, claims report

Having made his first Premier League start in Liverpool’s draw with Chelsea on Saturday, reports in Spain claim Stefan Bajcetic is in line for a call-up to his nation’s under-21 squad this year.

In a season where the deficiencies of Liverpool’s midfield have been in the spotlight, 18-year-old Bajcetic has enjoyed a breakthrough campaign with the first team.

The Spaniard was included in the club’s pre-season tour of Asia and hasn’t looked back since. He signed a new contract in August, became the Reds’ youngest-ever Champions League player in September, and scored his first goal for Jurgen Klopp‘s side in December.

And after two consecutive starts against Wolves and Chelsea, reports suggest Bajcetic is set for a call up to Spain’s U21 squad.

The Celta Vigo academy product has represented his country at U18 and U19 level, but according to Diario AS, both Bajcetic and PSG’s Ismael Gharbi could soon be called up to the U21s, with a view to featuring at this summer’s European U21 Championships.

With previous Spain U21s manager Luis de la Fuente stepping up to take charge of the first team after Luis Enrique’s departure, the U21s have a new boss of their own.

Santi Denia has taken up the position, a coach Bajcetic knows well from his time playing under him with the U19s.

The story also points out than an U21 call-up would “almost definitively” rule out the possibility of Bajcetic choosing to represent Serbia, the country of his father’s birth.

That prospect, though, has become increasingly unlikely in recent years, with Bajcetic establishing himself as one of Liverpool’s finest young prospects, and a player who looks set to make an impact at international level in the years to come.

Klopp spoke in glowing terms of Bajcetic before and after his full league debut last weekend, and there’s every chance he could be in line for more starts in the coming weeks.