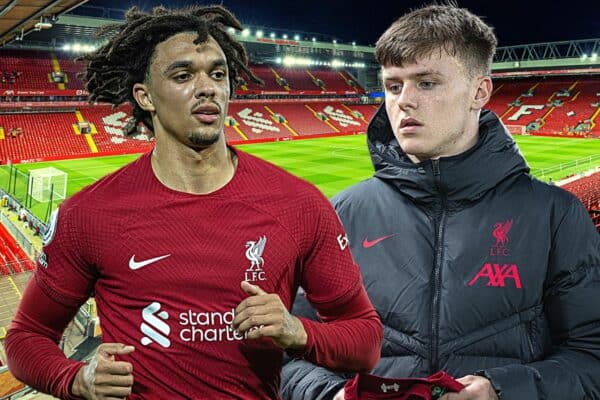 How Alexander-Arnold can reach landmark & Doak can set Liverpool record vs. Wolves

Liverpool will get their 2022/23 FA Cup campaign underway with a third round clash against Wolves, with a number of milestones possible at Anfield on Saturday.

Trent Alexander-Arnold could make his 250th appearance for Liverpool in all competitions.

A goal from Ben Doak will see him become Liverpool’s youngest ever scorer in the competition at the age of 17 years and 57 days.

Caoimhin Kelleher made his league debut for the club against Wolves in December 2020 – keeping a clean sheet in the 4-0 win.

Elsewhere, Curtis Jones played his first game under Jurgen Klopp in an FA Cup defeat at Molineux in 2019.

Third time lucky vs. Wolves in the FA Cup?

The teams meet for the third time in the FA Cup in the last six seasons. Wolves won both 2-1, defeating Liverpool at Anfield in 2017 and two years later at Molineux.

From the team that lost the last Cup encounter four years ago, only six current Reds remain at Anfield – Fabinho, Milner, Naby Keita and Jones all started, while Mo Salah and Roberto Firmino made brief substitute appearances.

Liverpool have won 11 of the last 13 meetings between the teams in all competitions – the two defeats coming in the FA Cup.

The league game here this season was scheduled for September 10 but was postponed due to the death of the Queen.

The last Anfield meeting saw Liverpool win 3-1 on the final day of last season. Pedro Neto scored for the visitors on three minutes before Sadio Mane, Salah and Andy Robertson earned the Reds all three points and an 11th straight league win over Wolves.

Liverpool’s record attendance came in 1952 – an FA Cup fourth round clash against Wolves. 61,905 witnessed a 2-1 win for the Reds with Bob Paisley scoring one of the goals.

Can Liverpool defend their crown?

Last season, Klopp became the sixth different Liverpool manager to lift the FA Cup. Only Bill Shankly and Kenny Dalglish (each twice) have won it more than once with the club.

The last time Liverpool defended the trophy, in 2007, they went out in round three, beaten 3-1 at Anfield by Arsenal.

They have won the FA Cup on eight occasions and twice, in 2006 and 2022, they have done so on penalties in the final.

Liverpool have reached the fourth round every season since 2011 except one year – 2019 – when they were beaten by Wolves.

Should Liverpool win today they will equal a club record of seven successive victories in the FA Cup. They won all six games on their way to lifting the trophy in 2001 and won the first game the following year against Birmingham City.

Liverpool are four goals short of recording 100 against Wolves at Anfield in all competitions, while four goals will also see the Reds reach 850 goals under Klopp in all fixtures.

They have gone five games in league and cup without a clean sheet since the League Cup win over Derby County.

Wolves in the FA Cup

From the winning team against Liverpool four years ago, only Jonny, Joao Moutinho, Ruben Neves and Raul Jimenez remain with the Midlands club. Diogo Jota played up front.

They are four goals short of scoring 50 at Anfield in all competitions.

Last season they went out in round four, losing 1-0 at home to Norwich, who themselves lost to Liverpool in the following round.

Since 2011-12, they have been eliminated from the competition seven times at their first hurdle, including a first round defeat in 2013-14.

Wolves have gone beyond round three only four times in the last 11 seasons, winning only nine times in the competition in that period.

Since a victory at Tranmere in 2010, Wolves have won only four away games in the FA Cup in 14 attempts.

The Lopetegui era is underway

Julen Lopetegui will take charge of a team against Liverpool for the first time in his career. He led Sevilla to Europa League success in 2020 – his first major trophy as a manager.

The Spaniard was appointed as manager on November 14. Since then they have won two of four games – at home to Gillingham in the League Cup and Everton in the league at Goodison, before losing to Man United at Molineux and drawing 1-1 at Aston Villa.

They have won one of nine away games this season in league and cup, beating Everton 2-1 at Goodison Park with Daniel Podence equalising before a 95th minute winner from Rayan Ait-Nouri.

Diego Costa has scored two goals in eight appearances against Liverpool during his career. He has never lost at Anfield in four appearances (two wins, two draws). His last appearance was for Atletico Madrid at Anfield in March 2020. He started in their 3-2 win.

Madley in the middle