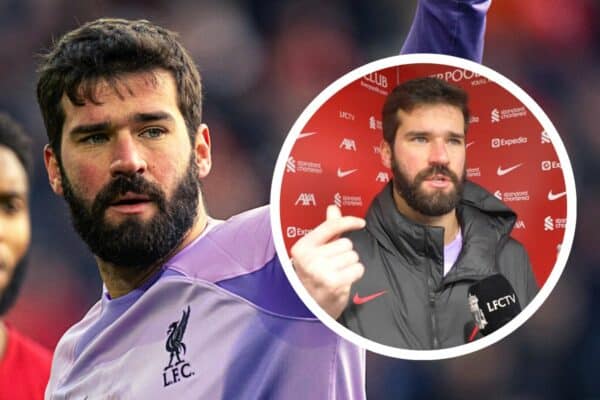 Speaking after Liverpool played out a drab draw with Chelsea at Anfield on Saturday, Alisson explained why he feels the Reds “have to be patient” to regain their best form.

The stalemate brought up a second consecutive clean sheet for the Brazilian and his defence, but in truth, that was one of the very few positives to come from another underwhelming performance.

It’s a result that leaves Liverpool eighth in the Premier League table, having only accumulated 29 points at the halfway mark of their league campaign.

Alisson believes the nature of the teams’ struggles means time is required before they are to find form again.

“I think just because of the moment we’re in, everybody wants to change everything immediately, but it’s not like that,” he told LFCTV.

“We have to build our game up again, we have to be patient.

“I want to change it immediately as well, but we have to be honest with ourselves, we have to trust the process, we have to stay positive, stick together, and keep working on the things we’re working on.

“We’re working really hard. Anybody can tell we’re not doing the things we used to do. We’ll wait for things to get better for us.

“But today, in a really difficult game, we kept the clean sheet and we’ll keep the positive things that we did on the pitch and take that into the next match.”

Liverpool now have a week to prepare for their next match, an FA Cup fourth round clash away at Brighton, where they fell to an embarrassing 3-0 defeat earlier this month.

And time on the training pitch is something Alisson believes will be useful.

“That’s good for us,” he continued.

“We know that with the schedule we have in front of us, it’s not easy to have time to work.

“Sometimes you just rest and then have to be ready for the next game, you can’t focus on improving technical things, you just try to fix things with talking and showing some situations.

“But now, this week, we’re going to have the time we need to do that as well, and we have to use it and take it to the next game.”