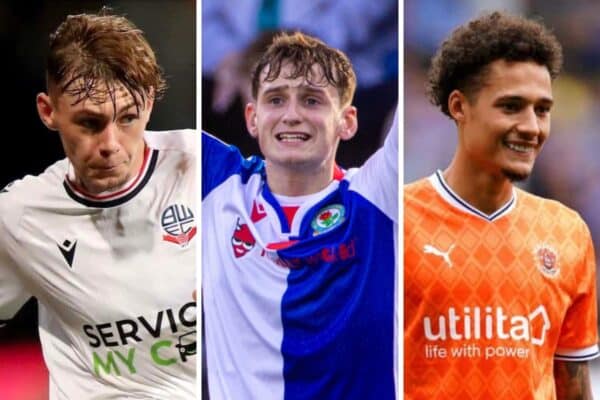 Tyler Morton notched another assist for Blackburn on a weekend that was disrupted due to frozen pitches and saw Liverpool recall a handful of players.

The Championship continues to be an intriguing league to keep an eye on with only seven points separating third from 14th.

Morton‘s Blackburn is currently occupying fourth spot with 43 points in 28 games, with their latest point added in a 1-1 draw at Bristol City on Saturday.

Twenty-year-old Morton was named in the XI for the 16th league game in a row and helped set up the opening goal of the game with a pull-back to Bradley Dack.

It came after a smart run into the box having been aware of the space left vacant by Bristol City.

Blackburn’s lead lasted just 14 second-half minutes, though, as Antoine Semenyo equalised after Zak Vyner’s shot was parried into his path. And Morton’s role in the goal was questioned.

The Lancashire Telegraph said he “allowed Vyner to skip past him too easily” having just stuck a leg out without having an influence on the play, assessing his overall performance as a six-out-of-ten.

Rovers held on for a 1-1 draw and closed out the match with 10 men after Daniel Ayala was dismissed after two yellow cards.

In League One, Conor Bradley featured for 90 minutes in a 2-1 defeat at Derby, ending an undefeated run of eight games across all competitions for Bolton.

Owen Beck, meanwhile, was not named in the matchday squad for the Trotters as he continues to find game time hard to come by in what is his second loan spell of the season.

Elsewhere, neither Rhys Williams (Blackpool), Adam Lewis (Newport County) nor Jarell Quansah (Bristol Rovers) were afforded a chance to play due to frozen pitches which have plagued the UK this weekend.

But Williams is expected to return to Liverpool imminently with the club to cut his loan spell short after 17 appearances for Blackpool, which will open the door for a move for Nat Phillips.

There have not been enough hits with loan deals so far this season and the hope is that can quickly change to the benefit of the club’s youngsters.