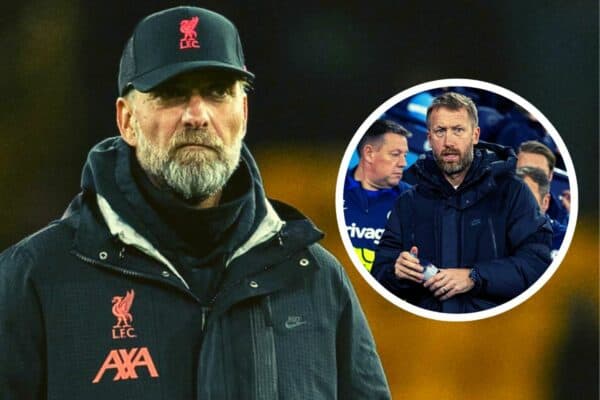 Jurgen Klopp was asked about Chelsea‘s recent investment on players ahead of Liverpool’s clash with the Blues at Anfield on Saturday.

Chelsea have spent £190 million on players this month alone, with reports suggesting they may not be done yet.

Speaking in Friday’s pre-match press conference, Klopp couldn’t help but laugh when a question was put to him about Chelsea‘s spending.

“Yeah, it will maybe get even worse, or better, I don’t know how you want to say it,” he said.

“Interesting! If the numbers are somehow true, then it’s impressive.”

The Liverpool boss then went on to elaborate on how the Reds must also splash the cash if they are to continue competing with their rivals.

That alone may well explain Fenway Sports Group’s search for investment, with the club’s owners said to be leaning towards a partial sale rather than a full one as things stand.

“I can’t see investment stopping in the future, and that means we have to do it as well,” Klopp continued.

“They believe in that as well, so if they now start spending, really properly spending, and do that, then you can’t not spend, or you’ll have a little bit of a problem.

“But I don’t think Chelsea, for example, can do that [spend] for the next 10 years in that manner. I don’t know, maybe they can. Other teams will have ups and downs, you just have to be there.

“We are here now in a good position. I know that sounds strange, because we didn’t play our best football, but in general we are in good hands.

“We don’t go crazy, or whatever, we really know about the responsibility we have and we really try absolutely everything to bring us back on track and go from there, and then not to worry too much.

“When you build a team, it doesn’t mean you have to rebuild it every year. You can start from there and give players a chance to make the next steps and these kind of things. We have quite a few of them already here. That’s the plan for the future, and that’s what we do.

“It’s not worrying that other teams can spend, it’s probably a matter of fact, and we have to react to that as well, but not just that.”