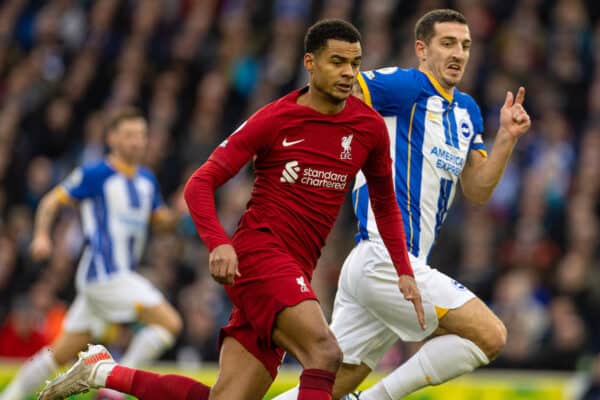 When do Liverpool play Brighton in FA Cup 4th round?

Liverpool have booked their place in the FA Cup fourth round with a trip to Brighton to come. But when will that tie take place at the Amex?

The Reds secured progress to the fourth round at the second time of asking as Harvey Elliott‘s long-ranger earned a 1-0 win over Wolves at Molineux.

It set up another away clash with Brighton, days after the 3-0 defeat in the Premier League that sparked an inquest.

Liverpool will now play Roberto De Zerbi’s side at the Amex on Sunday, January 29, with the 1.30pm GMT kickoff to be broadcast on ITV.

That fixture lands between meetings with Chelsea (home, Jan 21) and Wolves (away, Feb 4) in the Premier League.

There is still a chance, though, that one of the postponed games against the same two sides could be rescheduled in the midweek beforehand.

Jurgen Klopp‘s side have only won once in their last six clashes with Brighton, that being a 2-0 victory at the Amex in March 2022.

Liverpool last played Brighton in the FA Cup in 2012, with efforts from Martin Skrtel, Andy Carroll, Steven Gerrard, Luis Suarez and own goals from Liam Bridcutt and Lewis Dunk sealing a 6-1 win for Kenny Dalglish‘s side.

At the time, Brighton were in the Championship and managed by Gus Poyet, with Dunk the only player still at the club from their lineup that fifth-round evening at Anfield.

The two sides met in the fourth round back in 1991, with a 2-2 draw at Anfield leading to an eventual 3-2 victory for the Reds at the Goldstone.