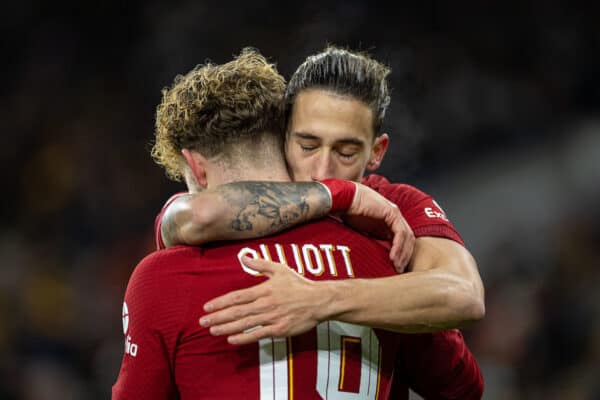 A Harvey Elliott wonderstrike ensured a deserved 1-0 victory for Liverpool at Wolves, in a strong response to their miserable result at the weekend.

A surprise starter after Jurgen Klopp‘s repeated claims that Alisson was his FA Cup goalkeeper, Kelleher will have relished another opportunity to step onto the pitch.

It was a quiet night for the Irishman, who riled up the Wolves fans as he knocked seconds off the clock with a relaxed approach to goal-kicks.

A night where needs must with Milner at right-back, becoming only the seventh player to make an appearance for the club after their 37th birthday.

Up against a player 16 years his junior the captain fared well, even outrunning Rayan Ait-Nouri up the wing on one occasion. A solid display.

Required to shift from left to right after another change at centre-back, Konate’s flexibility and the consistency he plays with are remarkable assets.

Once the back line was reshuffled again in the second half he was needed to fight fires more, and thankfully he did so with the speed and aggression that hallmark his game.

After a dismal display from Joel Matip at Brighton, it was a chance for Gomez to stake his claim again, with Virgil van Dijk facing another month out.

He did little wrong at centre-back or right-back, though it is in no way guaranteed that he will be keep his place against Chelsea.

An able deputy for Andy Robertson, which is crucial on nights like these, but Tsimikas is not as front-footed as the first-choice left-back.

He struggled at times against the pace and directness of Adama Traore, which also limited his forays into the final third, but played his part in a much-needed clean sheet.

A joy to watch as he gradually settles into the senior game, Bajcetic is, understandably, not quite there yet, but what he offers is very encouraging.

There were errors in his game, but he offered a strong platform at the base of the midfield, passing well and navigating out of danger more often than not.

Fit since the restart but only used as a sub in the previous six games, Keita’s return to the starting lineup was a welcome one amid Jordan Henderson‘s struggle for form.

An ever-eager option in possession and a valuable outlet moving up the pitch, he seems to play with more positional discipline than the player he replaced.

The only midfielder from a lacklustre trio to be retained from the weekend, Thiago was a vital presence alongside the less experienced Bajcetic, often covering for his little mistakes.

He was the tone-setter in midfield, handed acres of space to operate in, and it unsurprisingly led to a more dominant performance from Liverpool.

Harvey Elliott – 8 (Man of the Match)

Moved into the attacking line after growing concerns over his impact in midfield, Elliott took 13 minutes to step up and fire Liverpool ahead with a swerving left-footed effort.

Looks so much better not stepping on the right winger’s toes and more comfortable tracking back to cover the right-back – which he needed to do much more as the game wore on.

Klopp was forced to defend his decision to overlook Carvalho for five consecutive games in the buildup, but the reality is that the 20-year-old is yet to really make an impact as a starter.

It was the same at Molineux, where he drifted around in a similar fashion to Takumi Minamino in his first months at Liverpool.

Deployed as a centre-forward for the second game running and, like Darwin Nunez (slightly) before him, it is clear it will take time for Gakpo to find his feet.

There were some promising moments of buildup play, but three shots, one on target and two wildly off target say it all.

Eight changes from the humiliation at Brighton – some, no doubt, enforced – Klopp seemed to get the big calls right as he kept Thiago in and left out the likes of Matip and Fabinho.

The manner of the performance, and the early goal, allowed the boss to then manage the game from the touchline, withdrawing the likes of Milner, Gakpo, Bajcetic and Thiago, the latter who needs to be protected.

A place in the fourth round is the reward, and Klopp should now be considering fewer alterations for the visit of Chelsea on Saturday.

The likes of Keita, Gomez and perhaps even Bajcetic have surely done enough to warrant starts at Anfield.