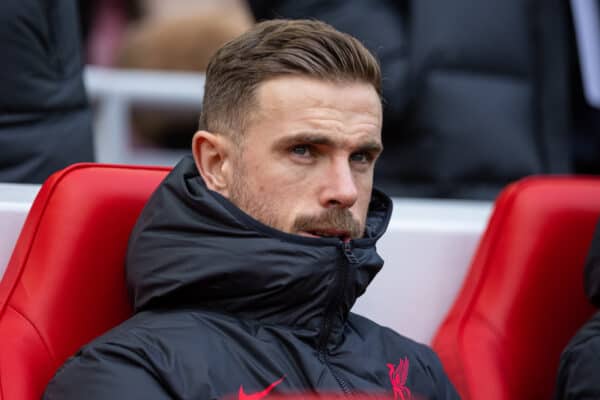 Having not started either of Liverpool’s last two matches, Jordan Henderson has admitted his exploits at the World Cup had a bigger impact on his energy levels than he anticipated.

After featuring in Liverpool’s embarrassing 3-0 defeat to Brighton earlier this month, Henderson was not involved in last week’s FA Cup replay victory over Wolves.

And given the improved midfield performance against Molineux, he was only on the bench for the Reds’ Premier League meeting with Chelsea on Saturday.

Having featured heavily for England at the World Cup, Henderson has now admitted that his efforts in Qatar have taken their toll on his recent form.

“I think I’d be lying if I said it hasn’t been hard,” he told BT Sport.

“Looking back, it probably took a lot more out of me than I thought.

"I’ve just got to keep going, keep trying to improve."

Jordan Henderson gives an honest assessment of his form as he looks to get back to his best ?

“The last few weeks, energy levels and stuff, the general mood, it has been really difficult over the last few weeks to perform to the level that I’m capable of, and that I need to be at to play for this team.”

Having played an integral part in all of the club’s success in recent years, the Liverpool captain is now part of a midfield that many believe is in need of a refresh.

But if there’s one thing we’ve learned about Henderson during his time at Anfield, it’s that he won’t give up.

“It’s been tough, but there’s no other option,” he continued.

“I’ve just got to keep going, keep trying to improve, keep trying to fight to get that good feeling back, because it’s been tough since returning over the last few weeks.”

Henderson will be hoping to regain his place in the midfield when Liverpool travel to Brighton for their FA Cup fourth round clash this Sunday.