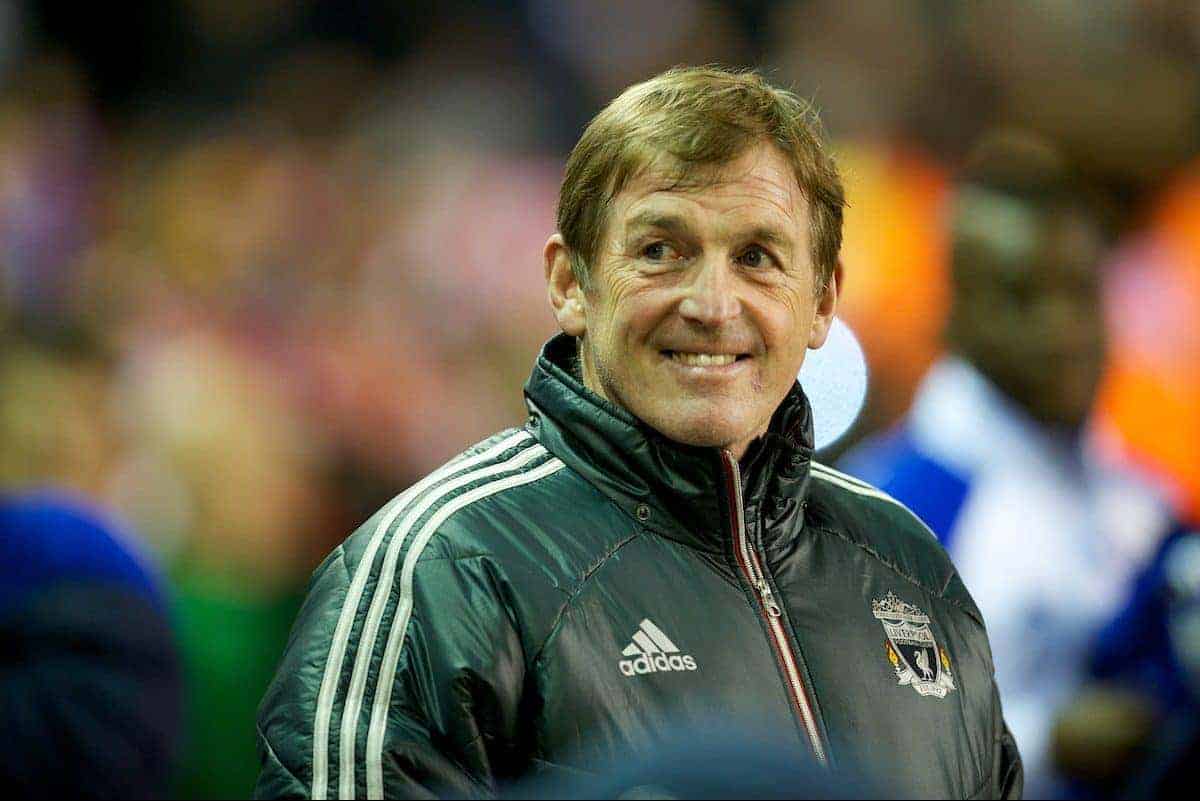 Kenny Dalglish was already a legend as a Liverpool player when he was offered the job of player-manager at the age of 34. The weeks and months that followed the terrible tragedy at the Heysel stadium in Brussels were difficult times for English football but especially for the club that had been involved. Kenny had the difficult task of trying to keep Liverpool challenging for the top honours in the game and attracting new players to the club knowing that he would not be able to offer them the incentive of European club competition for the foreseeable future. Combining the roles of playing and managing is not an easy task because the responsibilities are many but Kenny was fortunate to have the enormous experience of Bob Paisley to draw on. He coped with his new role so remarkably well that Liverpool won the coveted League and F.A. cup double in his first season in charge and it could have been a triple success because the club also reached the semi-final of the League cup but were beaten on aggregate by Queens Park Rangers.

The team made a decent enough start to the league programme with only one defeat from the opening 10 matches. But they were still 9 points adrift of Manchester United, who had a perfect record from the same number of games. As United faltered Liverpool gradually chipped away at their lead but eventually their rivals for the title would be from the same city not Manchester. Dalglish seemed reluctant to pick himself even though he still had a lot to offer as a player and he wasn’t in the team when a below-par Liverpool lost the crucial home fixture with Everton towards the end of February. Whether Bob Paisley encouraged Kenny to pick himself more as the season approached its end is unknown. What is without doubt though is the difference Kenny made once he started to play on a regular basis again. He was on the pitch for every minute of the final 7 league fixtures, all were won and the manager himself scored the goal at Chelsea on the final day of the season that made sure Liverpool were champions for the 16th time. At Wembley a week later Everton were defeated 3-1 in the cup final. Although Ian Rush grabbed the headlines for his two goals, other players to excel on the day were Craig Johnston & Jan Molby, two men who had been given little opportunity to show what they were capable of during Joe Fagan‘s final year in charge.

In 1987 Everton regained the championship they had lost to their city rivals a year earlier but Liverpool finished without a trophy for the 2nd time in 3 seasons after losing the League cup final to Arsenal. It was the first time Liverpool had lost a competitive match in which Ian Rush had scored. Kenny knew that Rush would be going to Juventus in the summer but he was already planning ahead with boyhood Liverpool fan John Aldridge arriving from Oxford before the end of the 1986-87 season. But it was in the close-season that the manager really got busy as the exciting talents of Peter Beardsley & John Barnes arrived from Newcastle and Watford respectively and shortly after the season started they were joined by Ray Houghton. All three would prove to be extremely influential as Liverpool won the championship by 9 points from Manchester United with some breathtaking displays, none more so than the evening when they destroyed Nottingham Forest 5-0 at Anfield just 4 days after they had beaten the same opponents to reach the F.A. cup final. Liverpool were strong favourites to beat Wimbledon but on the day it just wasn’t to be. Peter Beardsley had a goal ruled out because referee Brian Hill failed to play an advantage and called play back for a free-kick to be taken in Liverpool’s favour. Instead of being a goal up, a few minutes later they were a goal down. A penalty was fortunately awarded to Liverpool in the second half for a perfectly fair challenge but John Aldridge saw his spot-kick saved by Dave Beasant on a desperately disappointing afternoon when another double slipped away.

Ian Rush returned from Italy after just a single season away. Many supporters wondered if the manager would be able to find a place for both the Welshman and John Aldridge in the same team but as things turned out Aldridge was the main striker with 21 league goals during the 1988-89 season, although Rush was injured for much of the season and scored only 7 league goals, easily his least productive year since becoming a first-team regular in 1981-82. The championship seemed way out of reach. Twice the team had four-match spells without a victory and when they lost at Old Trafford on New Year’s Day it was their 5th league defeat and their chances of catching leaders Arsenal seemed slim. But 48 points were taken from the next 54 available and that meant Liverpool could afford to lose their final league game (at home to Arsenal) by one goal and still take the title. History shows that a man who would later join Liverpool scored the injury-time goal that would take the championship trophy out of Liverpool’s grasp in the cruellest way imaginable. But although the stakes were high, it was after all only a game. A month earlier Liverpool Football Club was involved in another tragedy of scarcely believable proportions when nearly 100 of their supporters were crushed to death at Sheffield on the occasion of the F.A. cup semi-final with Nottingham Forest. Liverpool won the replayed game and it was perhaps appropriate that it was again their neighbours Everton who would oppose them in one of the most emotional cup finals ever staged. Liverpool won 3-2 but the city and football was still in shock at what had happened in Sheffield. The 15th of April, 1989 changed a lot of people’s lives for ever. It changed Kenny Dalglish too. Loved by the supporters but perceived as a dour man by the media and someone who would never use half a dozen words when a couple would do, what Kenny and his staff and in many cases their families did in the aftermath of Hillsborough was truly astonishing. After a catastrophe that nobody could have envisaged, the manager and some of his senior players attended many funerals and made themselves constantly available to counsel bereaved families. Just by being there and showing that they cared, they gave support, comfort and strength to people whose lives had been torn apart in the face of such a massive tragedy.

Dalglish’s management skills came to the fore again during the following season. Although his playing days were now over (apart from a brief cameo appearance in the final league match after the championship had been won), Kenny led Liverpool to their 3rd title in 5 seasons. They achieved their biggest-ever league win with a 9-0 destruction of Crystal Palace in the middle of September. But football can be a strange game sometimes. Ten of the players who started that rout against Palace also started the F.A. cup semi-final with the same opponents nearly 7 months later. Liverpool lost 4-3 after extra-time.

For maybe the first time since he took over as manager, Kenny Dalglish started to get some criticism from a section of the fans who were unhappy with some team-selections for away games that they saw as unnecessarily negative and also for a couple of purchases of decidedly average players. Despite this, the team was still winning more than it was losing and was in a strong position by the time the two Merseyside clubs were paired together in the F.A. cup 5th round. The match at Anfield was drawn and 3 days later the clubs met again at Goodison Park. On an extraordinary night, Liverpool took the lead four times but on each occasion parity was restored by an Everton equaliser. Probably most people were so caught up with the remarkable events on the field that they didn’t register how Liverpool’s manager was reacting as the goals went past Bruce Grobbelaar. We will never know what might have happened if Liverpool had won a tame match 1-0 but probably the outcome would have been the same. Kenny Dalglish was exhausted physically, mentally and emotionally. Having to experience so many changes of emotion during such a cup-tie might have brought things to an absolute head but I suspect he could not have stayed much longer in the job anyway. Anyone who saw the press conference at Anfield the next day could only feel enormous sympathy and sadness for a man who had reached the end of the line and knew that for once in his life he had to put himself and his family before his job. Kenny looked a broken man and it was impossible not to feel for him and wonder how much of a part Hillsborough and its aftermath had played in his decision to quit.

A refreshed Kenny came back with Blackburn Rovers. It was good to see him smile again. Jack Walker’s millions helped but you still need to buy the right players and get them playing together in the way you want and in a way that will being success. Dalglish’s achievement in taking an unfashionable club like Blackburn Rovers to the League championship was probably more praiseworthy than anything he achieved on Merseyside. It proved that he could still manage at the top level. There might have been some doubts when he was appointed as Liverpool’s manager at such a relatively young age. But the man himself had great faith in his own ability and proved that he was every bit as good a manager as he had been a player – and as a player he was very special indeed, arguably the best player that has ever pulled on a Liverpool shirt.

Few men get to manage a club to its domestic championship. Even fewer manage it three times. But Kenny did and then he won it again with a different club. Anyone who saw him play will know what a gifted and intelligent footballer he was. Anyone who saw what he did so willingly after Hillsborough will know what a special man he is too. It can be no surprise that it took so much out of him, that it made him so ill even if it took a while to show. Kenny can be very proud of everything he achieved in the game as a player. He can be just as proud of what he achieved as a manager. He took over when a football club was at its lowest ebb and a few years later he had to somehow find the strength to cope with something even worse. After the club was vilified for what happened in Brussels, Kenny helped rebuild Liverpool’s good name in the football world. More importantly, he helped other people to rebuild their lives when something even more tragic happened. For as long as the game exists, Kenny Dalglish will always be spoken of as one of the greats; not just a great player and manager but also a great and humble man.