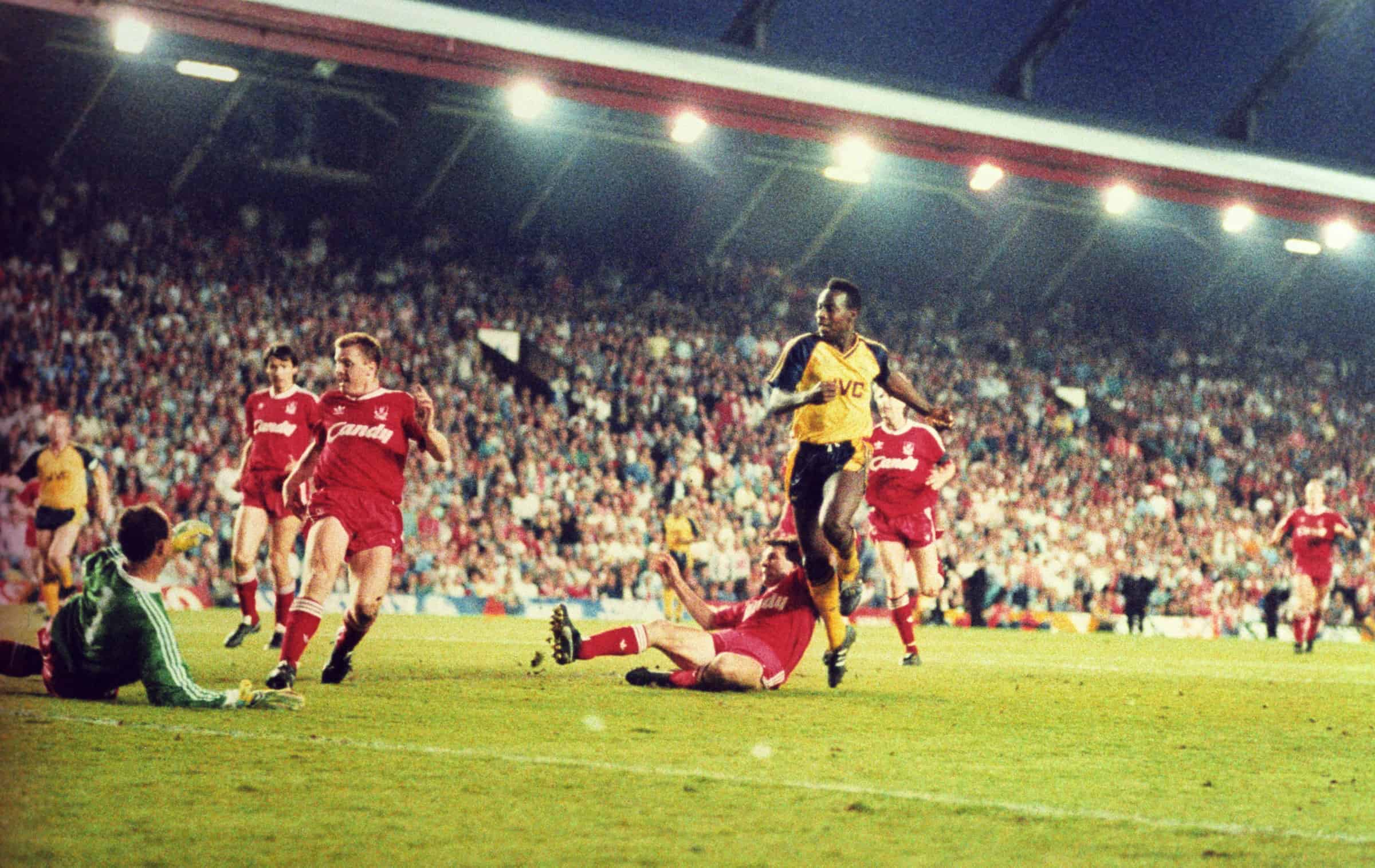 IF EVER there was a player to break the hearts of all Liverpool supporters, it would have to be Arsenal‘s Michael Thomas in 1989. Liverpool had taken a long break from the League schedule to allow for a period of mourning following the Hillsborough tragedy. When League play resumed, the remaining fixtures were crammed into a short period of time which would have been difficult under the best of circumstances.

Amazingly though, Liverpool not only rose to the challenge but surpassed expectations by mounting a late title challenge with what seemed like unstoppable momentum. The crowded fixture list was such that the Reds played 5 games in less than three weeks leading up to the 1989 FA Cup final against Everton, which needed extra time to win. That would normally be the end of the season, but there were still two League matches to be played over the next six days. Liverpool were suddenly in a tight race for the championship with Arsenal, who stumbled near the end while the Reds kept on winning.

All Liverpool had to do was avoid losing by more than one goal in their final match, which was at Anfield, and against Arsenal of all clubs. Doing that would then give them their second League and FA Cup ‘œDouble’, which would be the first time that one club had done it twice, and would be a fitting tribute to the victims of Hillsborough. Arsenal managed to score early in the second half to make it 0-1. This caused a lot of nervous moments but as the clock ticked down it looked like Liverpool would hang on through their obvious fatigue to take the trophy. There were only seconds remaining in injury time as Arsenal made one last attack, which ended with Michael Thomas scoring past a helpless Grobbelaar. That was the goal that robbed Liverpool of the title, and one that will never be forgotten by either club. Michael Thomas was revered at Highbury, and reviled at Anfield.

Michael Lauriston Thomas was born in Lambeth, London, on August 24th, 1967. He grew up as a Tottenham supporter and signed as a schoolboy with rivals Arsenal in 1982. On New Year’s Eve of 1984, he signed professional forms and graduated from the Youth squad to the first team. He made three appearances on loan to Portsmouth in 1987 before returning to Arsenal permanently. As if his life was to be written like a ‘œBoy’s Own’ comic book story, his first appearance as an Arsenal player was against his boyhood favourites Tottenham in the first leg of the 1986-87 League Cup semi-final. Spurs won 1-0 on the night but Arsenal won the second leg and progressed to meet Liverpool in the final. That final was memorable for being the first Liverpool game where Ian Rush scored but then failed to win. Michael Thomas was a late substitute in that match, and was duly awarded his first major medal.

In his first two seasons, he played mostly at right back and then switched to midfield when Arsenal brought in Lee Dixon. He adapted well to the position which was no surprise as he had already shown his versatility by playing as right back, centre half and midfield. He was good at making surging runs and could use his power and his pace to join in the attack through the centre. He was to win two League Champions medals with Arsenal, the second one for the 1990-91 season, and the other one of course coming as the result of that stunning last-minute winner at Anfield.

If that last-gasp winner from that @%$# Michael Thomas caused a shock amongst Reds, it was equally shocking to learn that the same Michael Thomas was to become a Liverpool player two and a half years later. After two more seasons with Arsenal, he fell out with manager George Graham and was looking for a transfer. Meanwhile at Anfield, Kenny Dalglish had resigned in the spring of 1991 and had been succeeded by Graeme Souness. Thomas initially wanted to go to Italy or Spain to resurrect his career, but with no firm offers he answered the repeated invitations from Souness to come to Anfield and be part of his new squad. Graeme Souness saw that he was an athletic player, who could move easily from one penalty area to the other, and could also play a holding midfield role. That particular skill would allow more freedom for John Barnes to attack, although Thomas was not afraid to join the attack himself. A fee of Â£1.5million was paid and Souness hailed him as the successor to outgoing veteran Steve McMahon.

Once again, the comic book script writers must have been at work as Michael Thomas made his Liverpool debut (as a 56th minute substitute for Jan Molby) against Tottenham in a 2-1 win at White Hart Lane. This was only two days after his transfer on December 18th, 1991. As the New Year began, his Liverpool career started to take off, with him scoring the only goal in a 1-0 win over Oldham. His next goal came almost two months later, and again was a vital one in a 1-0 win, this time against Aston Villa in the FA Cup quarter-final. It was a superb individual effort from Barnes who played the ball through to him as Thomas made a characteristic run on to it, and scored in front of the Kop. Liverpool were well out of the title race by this time, and so the FA Cup was the only chance of silverware for the season. Two more goals came for Michael Thomas that season in league play, but it was the FA Cup final against Sunderland where he wrote himself into Liverpool legend.

Liverpool versus Second Division Sunderland in the FA Cup Final should have been an easy task for the Reds, but having experienced the reality of Wimbledon a few years earlier, nothing was going to be taken for granted. In spite of a few quality chances in the first half, it remained scoreless at the break. Within two minutes of the restart, Steve McManaman chipped the ball into the box from the right wing, where Thomas was ready to turn as he allowed the ball to bounce in front of him, and then volleyed a superb shot into the far corner of the net. John Motson’s commentary summed it up as ‘œ’¦ and that goes down as one of the finest Cup Final goals.’ He also played the decisive ball through for Ian Rush to score the second in a relatively easy 2-0 win for Liverpool, earning them their fifth FA Cup and Souness’s only trophy during his tenure with the Reds.

The following season was not nearly as successful with several injuries keeping him sidelined much of the time. The season finished for him in January when he snapped an Achilles tendon, and was still recovering from that at the end of the year. By the time he returned he was only able to make seven appearances for the remainder of the season.

The 1992 FA Cup medal was the first of two major honours with Liverpool, as he also earned a medal as an unused substitute for the 1995 League Cup victory. By that time Graeme Souness had resigned and Roy Evans had been appointed as the new manager. At least the 1994-95 season was an improvement over the previous one with Thomas making a total of twenty nine appearances. The 1995-96 season was his best so far at Liverpool, as he stayed injury-free for the entire season. His partnership with John Barnes was working well, with Barnes attacking and Thomas breaking down the opposition’s attacks. It was a serious disappointment for him not to be named in the starting eleven for the 1996 FA Cup final against Manchester United, and he had to settle for playing the last five minutes, just one minute after Liverpool conceded the only goal of the match.

He was also a regular in the 1996-97 side, but could not reproduce the form of the previous season. In February of 1998 he was loaned out to Middlesbrough, and then at the end of the season he moved on to rejoin his former manager Graeme Souness at Benfica. Unfortunately, as much as he was admired by Souness, Michael Thomas soon found himself in the reserves as Souness was replaced by Jupp Heynckes. He stayed on for two years before returning to England for a season with Wimbledon, and then retired from football in May 2001 after only nine appearances.

Even though he left Liverpool as a player in 1998, he remained a resident of Merseyside and has since returned permanently where he now runs a VIP security and chauffeur firm based in the Wirral. He has also remained loyal to the Reds, holding a season ticket for the main stand and was one of the many former players to travel as a Liverpool fan to Istanbul in 2005. He also plays for the Liverpool legends in the Masters Football six-a-side tournaments, even though he gets a lot of stick from former Arsenal players for his choice.

Michael Thomas’s last minute winner that snatched the title from Liverpool in 1989 may have sent a tremor through all of Anfield, but his later contributions as a Liverpool player were enough for him to be voted as number 83 in last year’s list of ‘œ100 Players Who Shook The Kop.’