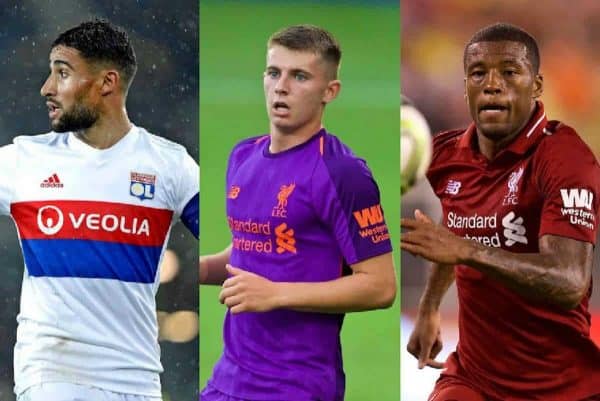 We round up the latest Liverpool news and transfer rumours on Tuesday, as the Reds head to the south of France for their pre-season training camp.

Simon Mignolet is yet to rejoin the Liverpool squad after his involvement at the World Cup with Belgium, and is expected to return after this week’s training camp.

The goalkeeper is due to leave the club before the end of the transfer window, however, with Jurgen Klopp appointing Alisson his new first choice, relying on Loris Karius as his backup.

Besiktas have already been credited with an interest in Mignolet, and now Sky Sports have reinforced speculation from Spain that Barcelona could make a surprise move.

This would no doubt be as cover for Marc-Andre ter Stegen, and at just 30 it is questionable whether this would be a wise move for Mignolet—despite the prestige of ‘playing’ for Barca.

Liverpool’s move for Nabil Fekir was very close to going through earlier this summer, but a knee issue picked up during the attacking midfielder’s medical put paid to that.

It has been increasingly apparent that the transfer would not get done further down the line and France Football now believe he will sign a new deal with Lyon.

The France World Cup winner is expected to return to training next Monday, following his excursions in Russia, bringing an end to the summer-long saga.

It is a shame that Fekir didn’t become a Liverpool player, but signing someone with fitness issues invariably doesn’t end well.

Woodburn off to the Championship

Ben Woodburn has got better as pre-season has progressed, with his physical frame looking that of a man rather than a youngster these days.

Despite some impressive showings, the Welsh midfielder is being sent out on loan this season, with Klopp keen to let him develop elsewhere for a year.

According to the Times‘ Paul Joyce, Woodburn will join Sheffield United imminently.

In fact, the Wales international was photographed with a Blades fan on Tuesday afternoon, with the move all but confirmed.

It seems a good venture for the 18-year-old, who should enjoy regular playing time in a side that adopts an attack-minded approach—unlike Aston Villa, who were also interested.

Liverpool’s youngest-ever goalscorer will hopefully return an even more accomplished footballer come the end of the season.

Wijnaldum Hoping to Put Injuries Behind Him

Gini Wijnaldum didn’t have many injury problems during his first two seasons at Anfield, but this summer has been a different story.

The Dutchman has suffered from a muscle issue and a virus during pre-season, but is now available again as Liverpool train in France.

Speaking to LiverpoolFC.com, Wijnaldum spoke about the importance of shining this week, as he looks to make up ground on his fitter team-mates:

“It was really frustrating for me [in America] because every time I thought I was coming back, a little something else came up.

“In pre-season you want to put a base down for the season, so it was tough for me with some small problems, but I hope I can stay fit now.

“You have to look forward instead of back and I need to work on my fitness. The guys have had a couple of weeks where they trained a lot and played.

“I haven’t played or trained as much as them, so this camp is really important for me.”

There have been rumours that Wijnaldum would leave Liverpool this summer but he remains an important squad member moving forward.

He will never set the world alight but his tactical intelligence and box-to-box style in midfield make him effective.

Plenty of pundits and former players are talking up Liverpool’s Premier League title hopes, with the Reds looking the strongest they have in years.

Steve McManaman is the latest to wade in on the topic, and in an interview with beIN SPORTS said he believes they are Man City‘s main challengers in 2018/19:

“I think they are close when it gets down to the hard facts.

“The signings that they’ve brought in will bring them in a lot closer—whether it’s enough to catch them is another thing.

“When you look at the business that Man United have done, Arsenal, Chelsea, Tottenham even Man City they brought in Mahrez by they were streets ahead anyway.

“You would say that Liverpool has done the best business they’ve strengthened up a decent squad and that should be good enough to finish in second at least or get them closer to Man City.”