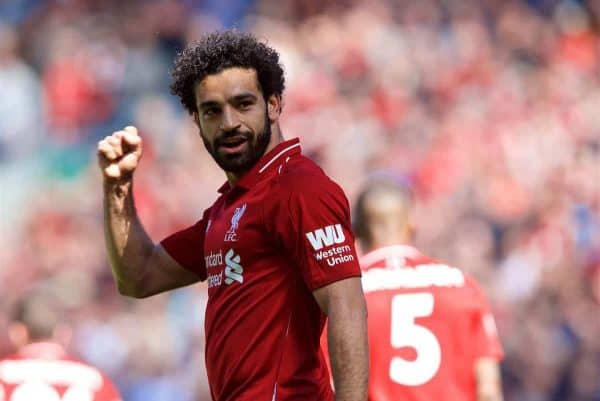 Liverpool return to Anfield on Tuesday night, with Jurgen Klopp‘s side entertaining Torino in their last pre-season game of the summer.

The Reds haven’t played at home since the 4-0 win over Brighton on the final day of last season, with every pre-season match either away or at a neutral venue.

Klopp has spoken about the importance of giving something back to the local supporters, however, hence the decision to play Tuesday’s clash at Anfield:

“We will do things around the game we usually don’t do.

“After the game we will sign shirts and stuff like that, all these things that aren’t possible in a purely competitive game.

“I really hope we see us all together because from my point of view we want to do things like that more often in the future.”

Standing between Liverpool and victory are Serie A outfit Torino, in what will be another test of the hosts’ credentials.

It is now less than a week until their 2018/19 season officially gets underway—West Ham make the trip to Merseyside on Sunday afternoon—making it Klopp’s final chance to perfect his plans.

Saturday’s 5-0 win over Napoli was further proof of what Liverpool are capable of and a similar scoreline against Torino would be the perfect way to sign off pre-season.

Ninety more minutes, then it’s time for the main event.

Considering the imminent prospect of West Ham coming to Anfield it is possible Klopp will not go with too strong a starting lineup.

He could be tempted to wrap certain players in cotton wool, especially Virgil van Dijk, who remains Liverpool’s only top-class centre-back option.

Joel Matip is out injured and Dejan Lovren only returned to training on Monday, making the Croatian unlikely to be fresh enough to feature against either Torino or the Hammers.

Ragnar Klavan should be available, however, as will Joe Gomez, while Nathaniel Phillips has impressed throughout pre-season.

Part of the reason why Klopp wanted a home friendly was to allow summer signings the opportunity to grow accustomed to their new surroundings.

That means Alisson, Fabinho, Naby Keita and Xherdan Shaqiri should all feature at some point during the evening—an exciting prospect for those present.

Jordan Henderson has an outside chance of making his first appearance of the summer but the returning Simon Mignolet is unlikely to play, with the goalkeeper due to leave this summer.

Key figures such as Mohamed Salah, Sadio Mane and Roberto Firmino are sure to appear at some point—for how long remains to be seen.

Adam Lallana could return after missing the Napoli win, as could Marko Grujic.

Since a return to Serie A in 2012/13, Torino have become an established top-flight team again, following numerous spells in the wilderness.

They have secured four top-nine finishes in the last five years, emerging as one of the more solid sides away from powerhouses such as bitter local rivals Juventus.

Pro Patria and Renate were dispatched of 4-0 and 3-0 respectively, before a narrow 1-0 victory over Nice and a 2-0 triumph against Chapecoense.

In terms of high-profile players, Torino are limited, although Andrea Belotti is a striker with a big reputation who is expected to move on to pastures new eventually.

The 24-year-old has 53 goals in 109 appearances for his club, as well as netting five times for Italy to date.

Their pre-season fixtures haven’t exactly been the most strenuous—they will come up against comfortably their toughest opponents at Anfield.

Speaking after Saturday’s 5-0 victory over Napoli, Klopp stressed the need for continued improvement, and a lack of emphasis on pre-season results:

“I don’t care what people think now about our team, our squad, that’s really not important.

“It’s only important that we make sure that we get a team together for the Tuesday game and then, even more important, for the Sunday against West Ham.

“They will be a completely different challenge, we know that already. So, don’t let the expectations grow somewhere because the Premier League is hard work and not flying football.

“But, of course, it’s much better than we would have lost 5-0 [and have] no confidence and need to work on pretty much everything.

“We know what we have to work on and we will do that.”

Liverpool vs. Torino is live on LFCTV and LFCTV GO, with coverage getting underway at 6.30pm (BST). Kickoff is at 7.30pm.

Henry Jackson is in charge of This is Anfield’s live blog, bringing you plenty of pre-match content before guiding you through the action at Anfield.