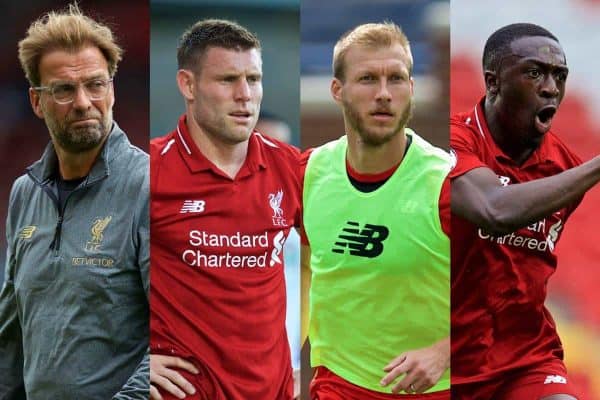 We round up the latest Liverpool news and transfer rumours on Saturday, as Jurgen Klopp oversees the final preparations for the trip to Crystal Palace.

With under two weeks left until the transfer window closes across the majority of Europe, Liverpool still have a host of peripheral players on their books.

The likes of Simon Mignolet, Marko Grujic, Sheyi Ojo, Lazar Markovic, Divock Origi and Dominic Solanke are unlikely to play regularly this season, and should be moved on before September 1.

But Klopp has stressed that if they remain on Merseyside for the first half of the season, he will expect them to push for a place in the squad:

“Whatever happens on August 31—I think that is the last [day]—there will be a specific point where it is clear that is the squad for the next four months until January.

“Who cannot be happy in these four months being part of the squad at Liverpool? I cannot help.

“What I can do is say everyone who trains to his highest level has a big chance to be an important part of the team and to stay in the team.

“You always have a chance to change the situation when you are part of the squad.”

This also serves as encouragement for those still considered an integral part of the squad but are currently on the fringes, such as Loris Karius and Alberto Moreno, as well as Klopp’s young hopefuls.

James Milner produced an excellent performance in the Reds’ 4-0 thrashing of West Ham, and this comes—with Ragnar Klavan leaving the club on Friday—as the oldest player in the squad.

At 32, however, the midfielder is still feeling as vital as ever, and speaking to Premier League Productions insisted he is eager to play every game if possible—and help to bring silverware back to Anfield:

“I think I missed one game last year through injury and that was the last [league] game of the season. The body is definitely holding up.

“I feel very good and very fit—I want to play every single game. Obviously that’s not going to happen, I’m sure, and you need to rotate to be successful with the amount of games we have.

“And with the quality that’s in the squad, I’m sure that’s going to happen.

“But as long as I’m performing every time I step onto the field and making it as difficult as possible for the manager to leave me out of the side, I can’t do any more than that.

“The biggest thing for me is that I want to be successful at Liverpool: to win trophies and for me to be a part of that and contribute to that.”

Milner could keep his place in the side for Monday’s clash with Palace, though Fabinho, Jordan Henderson and Adam Lallana will all be pushing for a start.

Klavan’s £2 million move to Cagliari came as something of surprise, but with the manager putting his faith in Liverpool’s youngsters it should be seen as a sensible decision.

After spells in Estonia, Norway, the Netherlands, Germany and England, the 32-year-old is embarking on a new challenge in Italy.

And speaking to Sky Sport Italia on Friday, he explained how Alisson, Lucas Leiva and Mohamed Salah all played a part in convincing him Serie A was the right step:

“[Darjo] Srna advised me to come here, as I talked to him via Dejan Lovren.

“Other Liverpool team-mates like Alisson, Salah and Lucas Leiva all spoke highly of Serie A.

“I’m certain we’ll do great things here and I am really fired up. The city is wonderful and so are the fans, I can’t wait to get started.”

Adekanye’s Route to the First Team

The Liverpool U23s were held to a 1-1 draw by 10-man Tottenham on their first home game of the season on Friday, with Adam Lewis missing an early penalty to compound the young Reds’ frustration.

There were elements of positivity to take from the Anfield stalemate, however, most notably Bobby Adekanye’s brilliant display on the right flank, with the Dutchman scoring for the hosts.

For U23s manager Neil Critchley, this was vindication for his selection, and the 39-year-old told the Liverpool Echo how Adekanye can continue to impress higher up:

“Just his finishing, that little bit of end product [was missing]. But if you took him out of our team tonight, he’d have been a huge, huge miss for us.

“He was absolutely terrific, and if anybody deserved a bit of luck when he was through in the 88th minute, then it was him because I thought he was our best player on the night.

“For all his ability in beating people one-on-one and getting into good positions, he has to now add numbers and assists and goals to his game.

“If he can do that then people will really start to take notice of him.”

Still only 19, Adekanye could harbour hopes of breaking through under Klopp—and as the U23s’ only genuine wide threat he can aim to keep the spotlight on him in 2018/19.