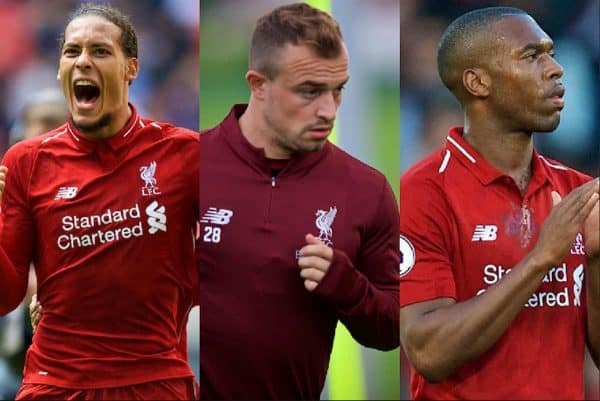 We round up the latest Liverpool news and transfer rumours on Wednesday, following the Reds’ thrilling 3-2 victory over Paris Saint-Germain.

The centre-back pairing of Virgil van Dijk and Joe Gomez have only conceded four goals so far this season, ever-present in Liverpool’s six games.

Gomez’s development alongside the Dutchman has been one of the key positives of the campaign so far, and it has come at the expense of the sidelined Dejan Lovren.

Taking to Instagram on Wednesday afternoon, however, Mohamed Salah revealed that his close friend has now returned to training after a long-term stomach injury.

Lovren is seen laughing along with his team-mates in the dressing room at Melwood, as he puts on his boots before heading out onto the pitch.

Jurgen Klopp had been hopeful Lovren would make his return during Liverpool’s busy run of seven games in 23 days, and it is seems he is now close to fitness ahead of a fight for Gomez’s spot.

It was reported later on Wednesday that Lovren has been charged with perjury in a case relating to his move from Dinamo Zagreb to Lyon in 2010.

Van Dijk put in another strong showing on Tuesday evening, marshalling the troops and making a crucial block to deny Julian Draxler at 2-2.

In an interview with LiverpoolFC.com, the imposing centre-back discussed the importance of belief within the squad and their expert handling of PSG:

“We have belief—you have to have belief. We want to do at least as well as we did last season. That’s a very hard thing to do, but you have to believe.

“They have many great players and we did very well. Everyone’s excited.

“We’ve made a good start but we haven’t won anything yet. We need to show it every week—every three days—and keep going. But we’re obviously very pleased.”

Shaqiri Prepared to Bide His Time

Xherdan Shaqiri made a late cameo in the win over PSG, having an impact with his pace and unpredictability.

The Swiss is still waiting for his first Liverpool start, but the Swiss told RTE Sport that he respects the competition for places:

“We push each other. Competition for football is always here.

“I try to do my best in training and in games when I come in to try and make it difficult for the coach.”

Shaqiri has a good chance of starting in Saturday’s Premier League clash with Southampton at Anfield, should Klopp feel the need to rotate.

It was a great night for Daniel Sturridge, who earned his first Champions League start since March 2012, scored the opener and performed excellently.

Someone who is clearly a fan is ex-Liverpool left-back Stephen Warnock, who has gone as far as to say he is still worth a huge sum of money, as he told BBC Sport.

“In pre-season, when Reds boss Jurgen Klopp wanted to see him fit and hungry, his attitude was exactly right.

“I watched him a lot and his performances were impressive too.

“That is why Klopp handed him his first start in a Reds shirt since November 2017 because, when you get Daniel fit and firing, you cannot ignore him.

“We are talking about having a £50 million player at your disposal because he is potentially a world-class striker.”

Sturridge will know that he remains second-choice striker behind Roberto Firmino, but his attitude looks spot on and there is a confidence to his play we haven’t seen in a long time.

Thomas Meunier scored PSG’s opener against Liverpool and was one of the few visiting players to leave Anfield with any credit.

The Belgian believes his side could learn a thing or two about the way the Reds play football, in what was a dig at his own team and praise for his opponents.

“We should follow Liverpool’s example: they play simply, quickly, with lots of intensity and overlaps,” Meunier told RMC Sport.

“It comes in waves, it never stops and the opponent is completely cornered.

“With our qualities, we can vary play, we have the players and the technical quality to do so.”

PSG’s world-class front three of Neymar, Kylian Mbappe and Edinson Cavani have been rightly lambasted for their lazy showing on Tuesday, with it playing a big part in the eventual outcome.