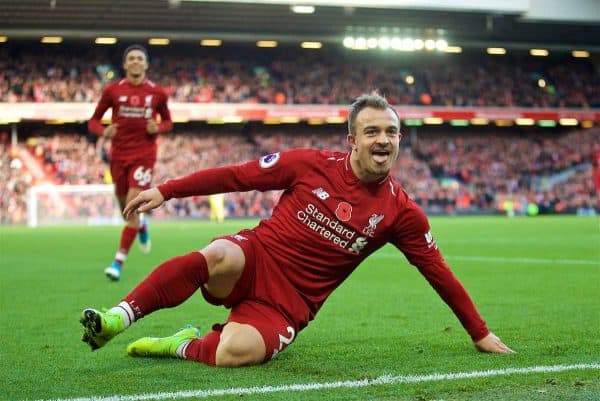 The media were in awe of Xherdan Shaqiri‘s performance in the 2-0 win over Fulham, but feel the Reds still have plenty of room for improvement.

The Reds cruised to a routine win over the Premier League’s bottom side to ensure an immediate return to winning ways.

Mohamed Salah put the Reds ahead, finishing a devastating counter-attack seconds after Fulham thought they had taken the lead through Aleksandar Mitrovic’s header, which was ruled offside.

A superb volley from Xherdan Shaqiri shortly after the break wrapped up victory, as Klopp’s team saw out the remainder of the game with the minimum of fuss.

Liverpool were far from in top form but did enough to earn a vital three points, which gives the Reds their best-ever return after 12 games of a Premier League season.

Here’s how the media assessed a routine afternoon at Anfield.

The Telegraph’s Chris Bascombe praised how the Reds “eased” their way to three points and are still cruising to victories:

Liverpool eased through the second half. They are winning Premier League games while giving the impression there is more to come. It is a long time since they had such a solid base on which to build.

Writing for Goal.com, Neil Jones thought the performance and result showed Klopp’s side have learned how to win efficiently without needing to hit top form:

The thing about this Liverpool team, though, is that it has learned how to win, that moments and flashes can be enough if fluidity eludes.

With the Reds having been criticised for compromising style in pursuit of points, Jones was also emphatic in his assessments of Liverpool’s form:

The team’s progress, in all aspects, is there to see – whether they are playing ‘City football’ or not.

Taking a moment to reflect on the Reds’ position, the Liverpool Echo’s James Pearce is in no doubt that Klopp’s side are in a great position, despite the underwhelming feeling around Anfield:

The reason the mood is mixed stems from the fact that the competition at the top has never been more formidable.

However, the reality is that the Reds are in a position of real strength with massive room for improvement.

The Evening Standard’s David Lynch praised Shaqiri for delivering when other key men have struggled, and thinks this has made him Liverpool’s “most reliable” forward:

When given a chance to start games for Liverpool, Xherdan Shaqriri always produces.

With Sadio Mane and Roberto Firmino still not quite at their best, it is crucial for Klopp to have another forward who can step up to the plate.

Pearce explained why Shaqiri is a unique talent and assessed that he brings attributes to make a difference:

Shaqiri is a rare breed – strong as an ox but with the finesse of a ballerina. Crucially, he provides the Reds with the kind of creative spark they simply don’t possess when he’s not out there.

The Mirror’s Darren Wells thinks Liverpool are a much better team with Shaqiri in the side:

Liverpool no doubt look more lively with him in the starting XI, and has surely made it harder for boss Jurgen Klopp to leave him out again.

And Jones thinks Shaqiri is already becoming “indispensable” and felt his performance showed it was an error to not take him to Belgrade to face Red Star:

Either way, Shaqiri is making himself indispensable.

How he was missed in Belgrade, when the club took a diplomatic decision to leave him at home for fear of stoking tensions with Serbian supporters. An error, in hindsight. One suspects it will not be made again.

And with thoughts still on that Red Star defeat, our own Karl Matchett thought that the starting team against Fulham should have started in Belgrade:

This, arguably, should have been the lineup in Serbia. Even if Shaqiri couldn’t feature, a single switch and the better-functioning midfield might have been the wiser course.

Jones discussed Klopp’s return to 4-2-3-1 and feels that the Reds are showing positive signs in the shape so it should be retained:

It [Liverpool’s 4-2-3-1] isn’t perfect, not yet, but with Salah back scoring – that’s 24 in his last 22 Anfield appearances, by the way – and Shaqiri in this kind of form, it should be persisted with.

Certainly, Salah looks more comfortable centrally than from the right at present – though Roberto Firmino‘s form has been a little indifferent in the tweaked formation.

Matchett felt the starting XI Klopp chose is Liverpool’s strongest, but was unsure how impressive that team were:

The starting lineup was quite possibly what many fans would consider Liverpool’s strongest XI to be at this point.

To that end, is it a positive that they were picked and got the job done? Or more of a concern that it was still another laboured performance?

However, ESPN’s Glenn Price saw concerns with how easy it was for Fulham to expose the Reds on the counter-attack in the changed formation:

Liverpool are too easy to counterattack against at the moment and better teams will punish them if it continues to be the case.

Bascombe assessed quite the opposite, praising how Liverpool have made themselves far harder to score against which he feels will provide the basis for a sustained title charge:

Amid the mild hints of criticism despite a record-breaking start in the Premier League it should not go unnoticed how difficult Klopp’s side have become to not just play, but score against.

The foundations for a sustained title challenge are there, even if there has been a clamour for more decorative arts from those further forward.

Meanwhile, Lynch thinks finding the right balance in midfield is still proving problematic and assessed Klopp needs to find the right set-up sooner rather than later:

Another game, another central midfield configuration for Liverpool. However, Klopp didn’t seem like he was particularly happy with what he was seeing in the middle of the park throughout – and not for the first time this season.

But now, with all his options apart from Alex Oxlade-Chamberlain fit, he must find a formula that he is actually happy with.

The BBC’s Steve Sutcliffe thought Salah showed signs that he is close to rediscovering his best form:

The Egyptian had scored nine times at the same stage last term but his performance against Fulham, where he registered his sixth goal of the campaign, suggested he is not far from replicating his best form.

Liverpool certainly took advantage of the reprieve and Klopp will have been heartened at the way Salah streaked clear of a posse of white shirts to finish with aplomb.

The poise, the control and the finish was a flashback to last season’s dazzling exploits.

Jones attributed Salah’s improved form to Shaqiri, noting how the Egyptian looks “happier” when able to link up with the Swiss international:

Not only is he bringing his own excellence – his finish here was clinically taken – but his liveliness, confidence and mentality seems to be rubbing off on those around him.

Salah, in particular, seems happier when the former Stoke man is on the field.

Finally, Lynch praised Trent Alexander-Arnold for a strong bounce-back performance, and thought that this showed the youngster has the mentality to succeed going forward:

The teenager wasn’t perfect in this game, but showed that he is capable of putting poor performances behind him quickly.

That skill will be vital to him delivering on his considerable promise.