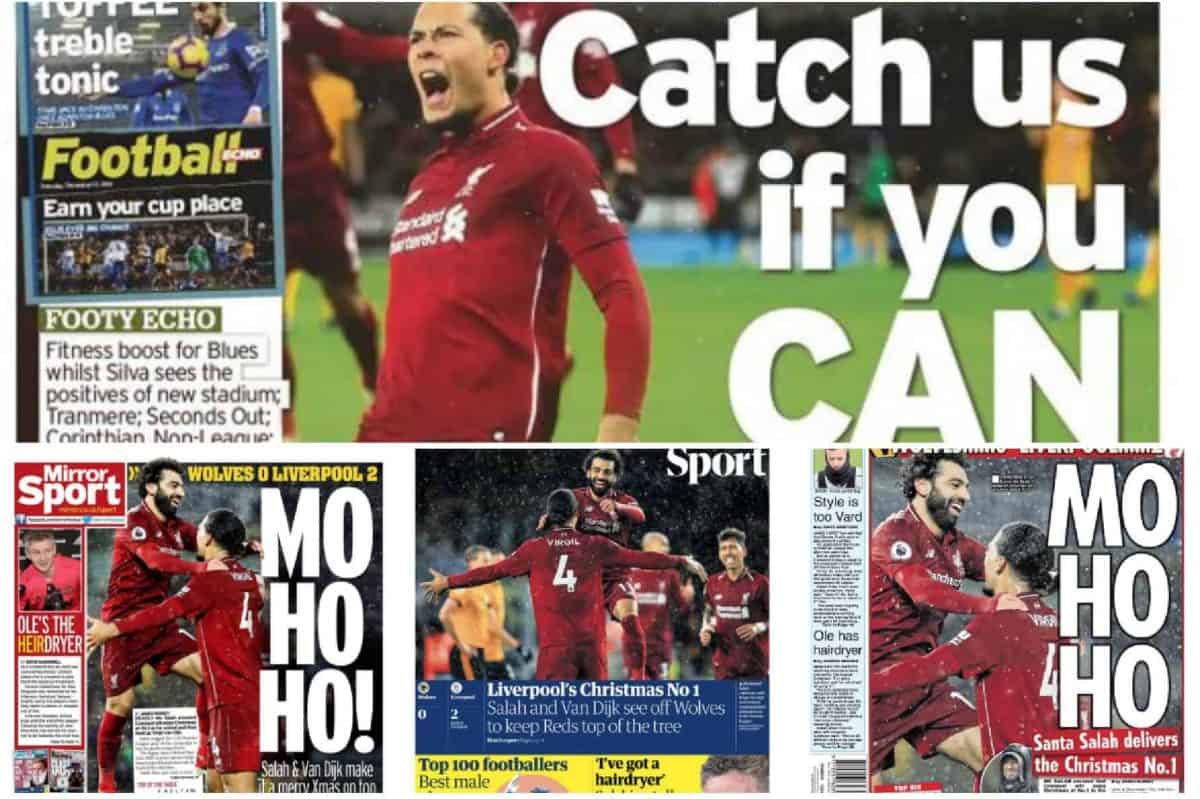 The media lauded Mohamed Salah and Virgil van Dijk’s performances and felt Liverpool’s 2-0 win over Wolves was another statement victory.

The Reds ensured it will indeed be a merry Christmas after earning a big three points to open a four-point gap at the top of the Premier League.

Goals in either half from Salah and Van Dijk did the damage at Molineux to ensure Jurgen Klopp’s side will sit pretty atop the table on Christmas Day.

It was an excellent result for the Reds in what looked a potential banana skin fixture, and it puts real pressure on Man City to respond for the first time this season.

Everyone associated with Liverpool is buzzing right now and here’s how the media assessed an excellent win at Molineux.

Reporters thought this was another statement win for the Reds

The Mirror’s Alex Richards felt Liverpool “laid down a real marker” for the title race ahead:

But make no mistake, they laid down a real marker in testing conditions, against a tricky opponent.

The Liverpool Echo’s James Pearce praised Klopp’s side for winning at a venue Man City failed to, highlighting “maturity and discipline” as key:

A rain-sodden assignment laced with danger was negotiated not with full throttle football but with a composed performance brimming with maturity and discipline.

Our man Henry Jackson believes it’s a win that will have showed Man City they face a serious battle for the title against “the best Liverpool team since the 1980s”:

Make no bones about it, this is the best Liverpool team since the 1980s and they are in with a wonderful chance of ending that long wait for a league title.

They are top on merit and Pep Guardiola will know his side have a serious fight on their hands between now and May.

ESPN’s Glenn Price compared the situation to that enjoyed by Brendan Rodgers’ Reds in 2013, but feels Klopp’s team are more complete and better prepared to go the distance:

What’s the significance of being top of at Christmas? Each of the past four teams have gone on to become champions. Brendan Rodgers’ 2013-14 Liverpool team were the last side to buck this trend.

However, this is an entirely different Liverpool team. This is one equally as devastating in attack, yet more solid defensively and possess the necessary depth to keep up this unbeaten form.

Pearce thinks Klopp’s side have a far better squad than on the three previous occasions, and thinks this superior depth could make the vital difference:

On three previous occasions in the Premier League era Liverpool have been top at Christmas and failed to stay there. But they didn’t have a squad like this.

Rodgers’s and Benitez’s teams had the firepower in Luis Suarez and Fernando Torres. They had the midfield dynamism of Steven Gerrard.

They did not have the defensive fortitude and technical brilliance of Van Dijk.

Writing for Goal.com, Neil Jones labelled van Dijk’s performance “a display of the highest quality” and thinks the Dutchman stands alone as the world’s best centre-back:

That capped a flawless performance from the Dutchman, who surely has no equals right now in terms of centre-backs. You get what you pay for in football; and a year ago Liverpool paid top dollar for a very special defender.

This was a display of the highest quality, from a player who has been turning them in since he walked through the door at Anfield.

Jackson assessed Salah as “back to his absolute best” and noted the importance of the Egyptian’s contributions:

Salah was majestic at Molineux, performing better than any player on the pitch and showing exactly why he is regarded as one of the world’s best footballers.

Back to his absolute best—eight of his 11 league strikes have either been openers or only goals.

Richards thinks Salah has now fully adapted to his position change, assessing that the Egyptian is now “starting to really shine” as the main striker:

He’s perhaps taken time to adapt to a new role playing centrally rather than from the right, but as the focal point in Klopp’s 4-2-3-1 formation, he is now starting to really shine.

On the goal itself, ESPN’s Mark Ogden was among a few reporters to liken Salah’s finish to the sort regularly produced by Lionel Messi:

It was the kind of finish that only the likes of Lionel Messi can produce on a regular basis, but Salah made it look easy.

Meanwhile, Jones thinks the form of Salah and Van Dijk alone is making the Reds an almost unstoppable force:

With Van Dijk in this kind of form, and with Salah running riot at the other end, who fancies stopping Liverpool right now?

They weren’t impeccable here, but such is the standard their players are setting for themselves, it no longer matters. Second gear is enough at the moment. With Van Dijk and Salah, they’ll take some stopping.

The Mail’s Laurie Whitwell attributed van Dijk as the main reason for Liverpool’s rise and thinks the improvement inspired by the Dutchman makes him a serious contender for player of the year:

It has already been said his £75million fee was money well spent, but it is quite something to think of what he might be worth now. At this rate he is surely a genuine contender for player of the year gongs.

More than any other Liverpool player he is responsible for Jurgen Klopp‘s team standing top at Christmas. They have dropped just six points, because of brick wall defence rather than blitzkrieg attack.

The Liverpool Echo’s Ian Doyle believes van Dijk is on his way to becoming one of the Reds’ greatest ever defenders:

Here, once again, the Dutchman was imperious.

But, a year into his Liverpool career, Van Dijk is already making a case for being among the club’s greatest ever defenders. He really is that good.

Reporters offered some interesting alternative thoughts from the victory

The Guardian’s Stuart James was most impressed by the way Liverpool saw the game out:

Liverpool are now unbeaten in 19 Premier League fixtures and it was particularly impressive to see Klopp’s team close out this game with the minimum of fuss, bearing in mind that Wolves have beaten Chelsea here and taken points off both Manchester clubs and Arsenal this season.

Jackson praised Klopp for another shrewd rotation operation and believes the Reds look much fresher for the German’s fine work in this regard:

It was a resoundingly positive night in that respect at Molineux, with the players not exerting huge amounts of energy and key men not playing the whole 90 minutes.

In years gone by, there would have been serious worries surrounding burnout at this point in the season, but Klopp has eradicated that issue emphatically.

And Price praised Klopp’s substitutions in bringing key players off and handing minutes to some of those who needed a run-out as the busy festive period gets underway:

Klopp’s substitutions also helped shut the game down to save some vital energy ahead of the busy festive period.

The Independent’s Simon Hughes focussed on the competition for places in the squad and explained why this as a key factor behind Liverpool’s surge this season:

His [Henderson’s] starting place has been threatened by the arrival of new competition but that competition is pushing Liverpool on, making them tougher to read, tougher to outstrip and ultimately tougher to beat.

Maybe it seems they are freer and maybe it seems like they have more space when it matters because they are fitter and fresher through the rotation policy that Klopp has adopted.

The media also picked out other impressive performers on the night

Price thought Roberto Firmino had a good night and thinks the Brazilian has now adapted well to his altered No.10 role:

He created a lot of space and time on the ball for himself by continually dropping deep to good effect. He has had his struggles with the No. 10 role, but he’s far more comfortable in it now.

Jackson thought Jordan Henderson excelled in his altered position and saw positive signs over a potential midfield partnership between the captain and Fabinho:

That’s not to say he didn’t sit deep for large periods, but his role was more box-to-box in style and Klopp’s decision to use him that way in a 4-3-2-1 formation paid off.

Henderson’s energy saw him biting into tackles and covering ground, while his passing ability was more risky and effective than as a No. 6. […] He and Fabinho can be a good foil for one another moving forward.